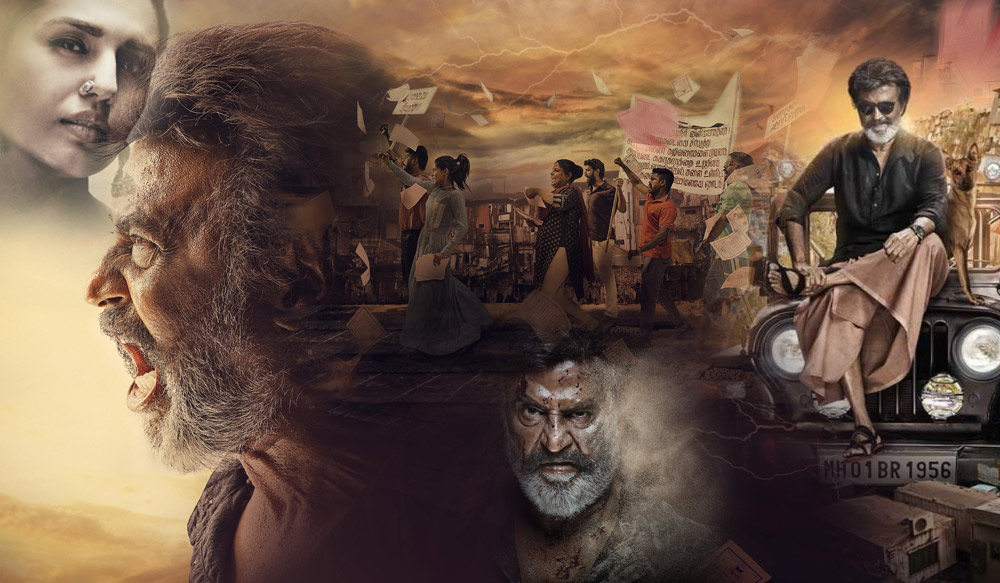 Director Pa Ranjith introduces Rajinikanth, in what can be called his most humble introduction scene on celluloid so far, with him getting his middle stump knocked out on the very first ball as he plays cricket with young kids in the slum. He establishes with that very shot, that it’s Rajinikanth, the actor, who is going to portray the role of Kaala and not the superstar.

Karikaalan (Rajinikanth), a muslim Tirunelveli native, is a family man who all of Dharavi looks up to as their saviour. He gets his name ‘Kaala’ from a god of the same name, who all the Hindu Tamil migrant dwellers of Dharavi are followers of.

The slow-pace of the film ensures that you become a resident of the claustrophobic slum. It surely surprises those who would have bought the ticket in expectation of witnessing Rajini in all his swag, for here they just get to see a character, who is almost always dressed in a plain black shirt, lungi and aviators. He doesn’t carry a gun but an umbrella and uses it as his weapon, whenever required.
But that doesn’t mean the director has compromised on those big moments his fans crave for. The slow-motion walks, the close-ups, the punchlines are very much there. He is still capable of fighting a dozen of goons single-handedly but the action-choreography is more convincing and real, this time.

He plays his age with grace and doesn’t make any fake attempts of convincing the audience otherwise. Ranjith has managed to unveil the ‘actor’ in Rajini, the superstar. An actor who has an unmatchable screen presence. But at the same time, he has also ensured that the films’ other characters get their share of limelight, too. Like for example, the women of Kaala, unlike Rajini’s previous films, are anything but props. They have pivotal roles to play and aren’t there just for dramatic relief.

Karikaalan’s wife Selvi (Eashwari Rao) brings in the much-needed humour and domesticity in the narattive. Their middle-age romance is not just endearing but also very aspirational. Huma Qureshi is admirable as Zarina, a single mother, an NGO worker and also Karikaalan’s ex-lover.

Watch it for the story, and the incredible performances.