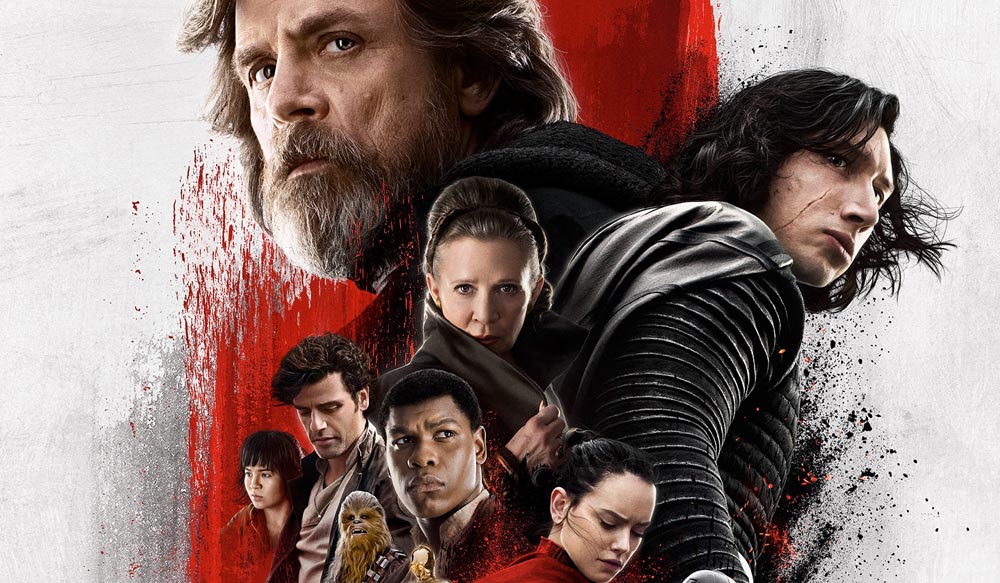 Picking up where 2015’s The Force Awakens left off, Johnson plops us right in the middle of a battle scene where Poe and other Resistance pilots are attempting to take out an enemy Dreadnaught craft belonging to the First Order. Right away, there’s Poe cracking jokes over the intercom to the over-the-top First Order leader General Hux (Domhnall Gleeson). It’s our first sign that Johnson is going to inject some humour into The Last Jedi.

Then we are back on the deserted island cliff where Rey handed Luke the lightsaber at the end of Force Awakens. No spoilers, but Luke’s reaction to the gift is one Star Wars fans will love. Like the banter-filled scene between Poe and Hux before it, it lets us know that though there will be plenty of darkness throughout, Johnson is always looking to colour his scenes with moments of levity.

The cast of The Last Jedi is pretty deep, but Johnson gives his narrative a chance to breathe.

We get drawn out scenes with Luke and Rey on what turns out to be the Porg-filled island of Ahch-To. She’s there to learn more about the Jedi and to entice Luke to come help the Resistance defeat the evil Kylo Ren, who also happens to be Luke’s nephew. While on Ahch-To, Rey also discovers herself mentally linked to Kylo. She thinks maybe she can save him, while he thinks he can turn her to the dark side.

Luke, on the other hand, has turned to a hermit-like existence, bruised by his failure as a mentor & teacher (“I thought I could train Kylo,” Luke laments) and a loss of faith. It’s nice to see even the Star Wars universe get a sprinkling of the disappointments that tint our real-world lives.

Meanwhile, after Finn recovers from his injuries sustained at the end of The Force Awakens, he teams up with Rose to track down a codebreaker that will help them infiltrate a First Order ship and disarm a tracking device. Then there’s Poe and his trusty sidekick BB-8 who have to negotiate a power struggle with Vice-Admiral Holdo (Laura Dern), a new addition to the series. Other old favourites, including R2-D2 (whose first meeting with Luke is heartwarming to see), C-3PO and Chewbacca are reintroduced.

Johnson also gives us a deeper look at the machinations of the mysterious First Order. We learn that Snoke tapped Kylo to be his apprentice because he saw the troubled youngster as “a new Vader.” But Snoke senses a struggle in Kylo – who killed father Han Solo in The Force Awakens – between the dark and the light.

But if there’s one niggling bit, it’s in some of Kylo’s scenes. He’s fighting an internal battle between good and evil, but there are moments where Driver’s overacting is almost distracting.

How all this comes to a head in the film’s second and third acts, is best experienced unspoiled. A favourite new additions to the series gets introduced midway through – Benicio del Toro’s DJ. His character is one of those memorable secondary parts – like Boba Fett – that leaves a lasting impression and will have moviegoers thirsting for more.

From a visual point of view, The Last Jedi has bright pops of colour – particularly in one scene that takes place in a casino and in the film’s final battle Johnson has packed a lot into his scenery and fans should give themselves a chance to let all that action wash over them.

But, no matter how good it looks, it’s the story that matters. And like J.J. Abrams did before him with The Force Awakens, Johnson is trying to navigate a new world that will appeal to the next generation of Star Wars fans along with us oldsters.

You don’t have to be a Star Wars fan to love this addition to the canon.
The film doesn’t have the same cliffhanger ending of Force Awakens, but The Last Jedi will certainly have you saying to yourself: ‘I can’t wait for what comes next.’