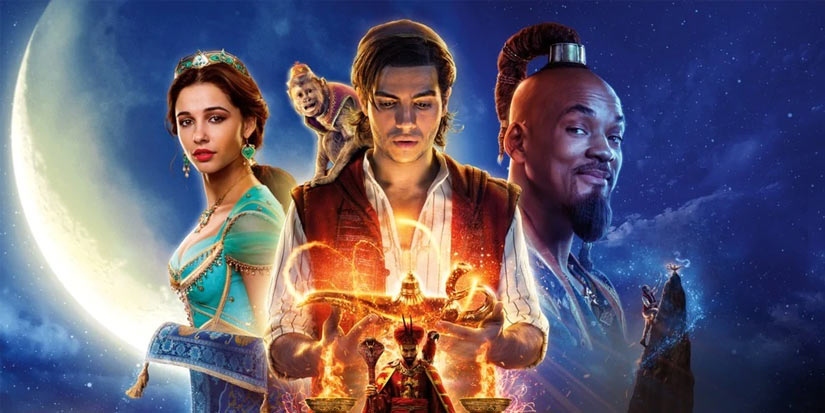 We’re all so used to the animated version of Aladdin that when the live action version was announced, many were against it. Even when the trailer was out, loads of negative reviews were seen everywhere.

But we gave it a chance and thought, “Don’t judge a book by its cover”. We liked the trailer so we were confident that the movie was going to be just as good and we were not wrong.What people need to realise is that animated and live-action films are two different things. Some actions that are awesome in animation will not translate too well into live-action.

You would have to convince your mind to accept that something ‘different’ can still be good if it has the feeling of familiarity- as in the case of the resurrection of Robin Williams by Will Smith which did not result in a unique take on the Genie. But with that mindset, it’s only then that one can really enjoy the movie and have a pleasant experience.

The beginning of the movie was different from what we were expecting, considering who was telling the story. After the Arabian Nights song, we’re introduced to the ‘street rat’, Aladdin. Although all the fuss about miscasting went to the Genie, if the miscast had been Aladdin, then the whole movie would have suffered. Mena Massoud fits perfectly in the role, we like how he’s funny, charming and got moves! These traits make him a likeable thief along with his relationship with his pet monkey, Abu.

CGI characters are often regarded with a bad eye but Abu and Rajah (Jasmine’s tiger companion) were beautifully brought to life and all being funny-realised characters. We felt the connection Aladdin had with Abu. He is expressive, funny and helpful as far as a monkey can be, which sometimes got both of them into trouble.

The encounter with Princess Jasmine (a character casting that we were very pleased with) is not long after, undercover among the people. It is a good thing that the movie did not rush through their first meeting but instead a reasonable amount of time was dedicated to the time they took in developing interest in each other. The portrayal of both Jasmine and Aladdin were well portrayed as we could feel the chemistry the characters had for each other.

Rajah (Jasmine’s tiger) didn’t have as much to do as Abu but the character was very pleasing and a lovely animal. The portrayal of Jasmine’s handmaiden Dalia by Nasim Pedrad is another character that stood out. Her excellent comic timing was on full display in a scene where Aladdin comes to the palace while Jasmine attempted to maintain her cover.

The one character that we thought was a miscasting is that of Marwan Kenzari as Jafar, the villain. We were hoping his lack of sinister voice from the trailer would be the only thing lacking in his portrayal of Jafar but his performance was just as bad. There was nothing memorable about the character even when he was given the opportunity to get into full villain mode near the end. We considered Jafar to be the ‘weak link’ of the movie. His companion, Iago, was very much liked. Even if the parrot is not very talkative, the few funny lines made up for it.

We heard many bad things about Will Smith’s portrayal of the Genie, but we thought he did a pretty good job. His should have kept only his own style to the character rather than trying to emulate Robin William’s version which didn’t quite work. But overall we’re satisfied with the Genie.

There were just the right amount of songs which were not particularly intrusive in any of the scenes. Both Massoud and Scott have nice singing voices which did their songs justice. Will Smith was also decent with his songs but we could have done without the end credits one.

Another thing that we should not put aside are the costumes. We have only praises for them. Jasmine’s are all as stunning as she is herself. The use of vibrant colours are quite impressive and exactly what is expected from a Disney movie.

To end, we’ll say, if you start watching the movie already disliking or hating the film based on the trailers then you’ll end it feeling the same way you started – with the bitter thought that it ruined your childhood. The thing is to accept the movie as it is. Different from what you know.

If you missed the movie in theaters, you can still catch it. Aladdin will be screened outdoors on the 2nd of November. Check https://cinesouslesetoiles.cinema.mu/movie.php?link=aladdin to book your ticket.