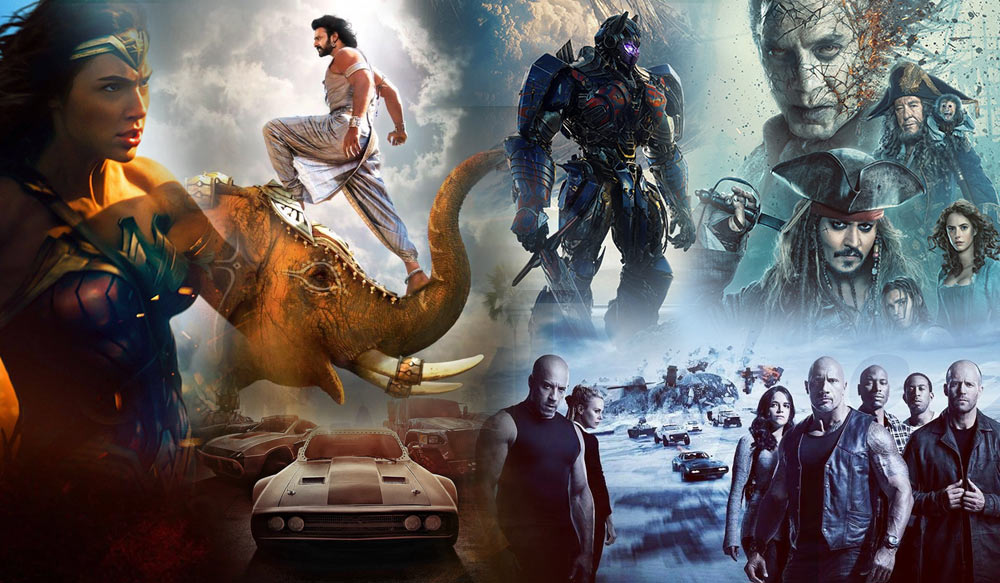 The Fate of The Furious

The Fate of the Furious introduces a new threat that shakes the very foundation of the crew. Charlize Theron portrays the first female villain in the Fast and Furious franchise, Cipher. As a villainous mastermind, she manages to corrupt Dominic Toretto (Vin Diesel) and turns him against his allies (Ludacris, Dwayne Johnson, Tyrese Gibson, Jason Statham) and even his wife, Letty (Michelle Rodriguez).

Baahubali: The Beginning, the Indian epic film released two years ago not only conquered the box office but also millions of hearts across the world. The franchise is back with a sequel starring Prabhas as Shiv, Rana Daggubati as Bhallala Deva, Anuskha Shetty as Maharani Devasena, Tamannaah as Avantika, Ramya Krishna as Sivagami and Sathya Raj as Katappa. The movie brings the most awaited answer to the question – why did Kattappa kill Baahubali; the wait will be finally over for all fans who have been racking their brains over this.

Pirates of The Caribbean: Dead Men Tell No Tales

Dead Men Tell No Tales focuses on Captain Jack Sparrow (Johnny Depp) trying to find the Trident of Poseidon, a powerful artefact that grants whoever possesses it total control over the seas, in order to defeat Captain Salazar (Javier Bardem). The rest of the cast reprise their roles, including Orlando Bloom who shows up as Captain William Turner, Jr. a blacksmith-turned-pirate, while Kaya Scodelario (Carina Smyth) and Brenton Thwaites (Henry Turner) also co-star in this last instalment of Pirates of The Caribbean.

Wonder Woman’s standalone movie is finally here! Gal Gadot plays the Amazonian princess Diana of Themyscira, in this origin story which explores the life of Diana the princess before she decides to don the superhero cape. Chris Pine portrays the American pilot, Steve Trevor who crashes onto her sheltered paradise island, Themyscira and opens her up to the outside world. Exposed to the mayhem and chaos of humans, Diana discovers her true destiny before ultimately becoming Wonder Woman.

With Optimus Prime gone, humans and transformers go to war against each other, posing a lethal menace to the survival of both kinds. Cade Yeager (Mark Wahlberg), Bumblebee, an English Lord (Sir Anthony Hopkins) and an Oxford Professor (Laura Haddock) form an unlikely alliance to uncover the mysteries of the past and the history of Transformers. Optimus prime makes a dubious comeback as an antagonist with threatening motives.