The wait to get a glimpse of the storyline of “Baar Baar Dekho” was over on Wednesday morning with the release of the movie’s trailer. It gives us a peek into the love saga — told through time travel — and portrayed onscreen by Katrina Kaif and Sidharth Malhotra.

The trailer has it all — love, romance, music, dance, even an elaborate wedding sequence — but what stands out is the theme of time travel.

The makers of “Baar Baar Dekho” had shrugged off reports that the movie was only a narration of what happens in the life of a person from 18 years to 60. But the trailer has given out that Sidharth’s character goes forward in time in some days.

The trailer starts with Jai (Sidharth) living a perfect life with his love Diya (Katrina), but their life takes a drastic turn when Jai develops cold feet and leaves Diya before their wedding.

It is then that he travels back and forth across time, and sees what the future holds for him. That is when he decides to mend his mistakes to relive his life with right decisions.

The film’s trailer is not just high on emotional and entertainment quotients but style as well.

Katrina is seen flaunting three styles – from a short-haired professional look to carefree young girl and even a peppy bride.

Sidharth is also seen in different looks. He sports a rugged look, and is also seen in a mature get-up with a beard and has also sported the look of a young professional.

Produced by Excel Entertainment and Dharma Productions, the film is helmed by debutante Nitya Mehra. It is slated for release on September 9. The trailer has won kudos from the film fraternity.

There seems to be no end to the rage ‘kala Chashma’ from Baar Baar Dekho  has stirred. The song, that has got the masses grooving to its tunes, has also set a trend by bringing the ‘Kala Chashma‘  back in vogue.

A yesteryear fashion statement, a Kala Chashma has been reinstated as a fashion essential post Sidharth Malhotra and Katrina Kaif’s stint with the eyewear in the song.

A leading eyewear brand is now ready to pay over 5 crores for the Kaala Chashma worn by Sidharth and Katrina in Baar Baar Dekho! 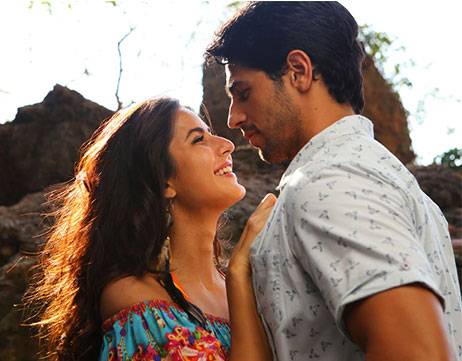 The eyewear brand wants to acquire rights to manufacture the Fashion accessory due to the growing demand post the release of the song. In an attempt to capitalise on the popularity of Kala Chashma, the brand is very keen to have a tie up deal with the makers of the film.

It was a calculated move on part of the makers of ‘Baar Baar Dekho’ to release ‘Kala Chashma’, even before the trailer. Well, it is an absolute smasher, overpowering every other track in the movie. Who would say that the original song by Amar Arshi is nearly a decade old. Badshah’s peppy reworking with some sprightly singing by Neha Kakkar and Indeep Bakshi, catapult you into a world of frantic fun. Even as this song overshadows the rest of the album, it was pleasantly surprising to find a few genuine gems in the soundtrack.