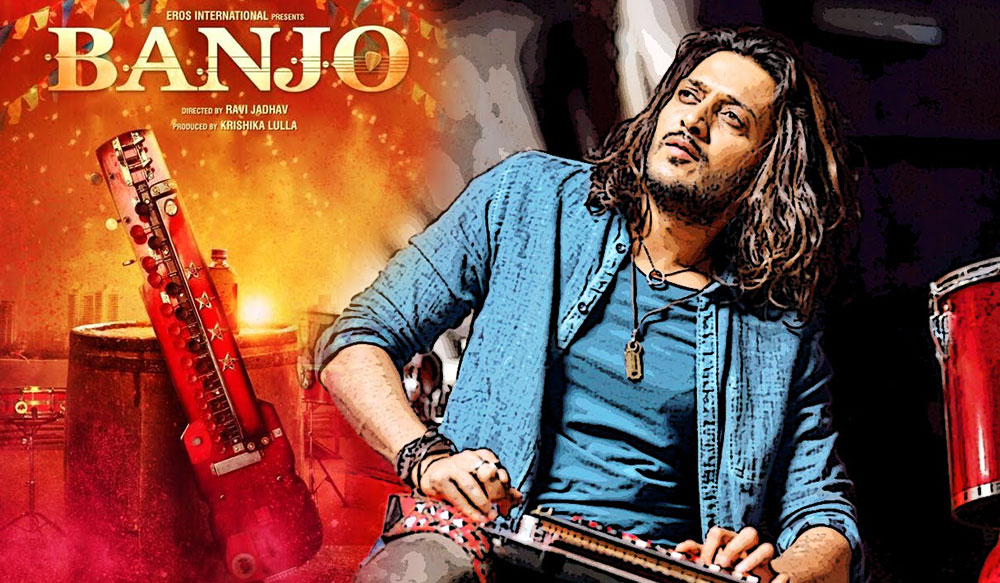 Banjo is a musical-drama starring Retiesh Deshmukh and Nargis Fakhri. Ravi Jadhav makes a directorial debut in Bollywood after commercially successful as well as National Award winning movies like Natarang and Balgandharv, which were also related to music and drama. The movie is scheduled to release on 23rd September.

The soundtrack of the movie is composed by Vishal-Shekhar and the movie is produced by Krishika Lulla for Eros International. Banjo appears to be set in Mumbai and is about Banjo players or Banjo Party who play every year during the festival season and are then forgotten for the rest of the year.

Riteish Deshmukh will play the lead role along with Nargis Fakhri. Nargis Fakhri plays the role of a DJ and Riteish is the banjo player in the movie.

After sleepwalking through his role in the sex comedy Great Grand Masti, Riteish Deshmukh is back on screen, this time, with a solo hero film – Banjo – directed by Ravi Jadhav. The trailer was loud and colourful and so is the music of the film. Riteish romances Nargis Fakhri in the film.

Mumbai is as much a city of slums as it is a city of skyscrapers and hotels like Taj. And more often than not, talent can be spotted in these small lanes of the slums – be it acting, craft, or playing musical instruments. Banjo is the story of one such talented musician buried deep into the darkest corners of Mumbai.

But apparently, playing Banjo is not his only talent. Raised in the by-lanes of Mumbai. Tarat is ruthless and resourceful. And above all, he is ambitious. Ambitious to get what he wants.

The musical film brings to light the life and journey of the Banjo players in India – which is a first for mainstream Hindi cinema. The music has been composed by Vishal-Shekhar and they don’t go wrong with this album at all. On this note,  take a look at the music review of Riteish Deshmukh’s upcoming film, Banjo.

Bappa, sung by Vishal Dadlani, is the perfect choice by the filmmakers for starting the album. Since the film is Ganeshotsav staple, it was a smart ploy to put this song. With some energetic percussion beats and banjo riffs, the song will uplift your mood and get into the festive mood instantly. Bappa is actually a bhajan mixed with drums, rock beats and electric guitar sounds.

Simplicity is the key and it fits well for this number. Hriday Gattani sings with the right mischief and puts a bit of laughter mood in the song. This song is, for sure, the romantic number in the album. Hriday Gattani makes a mainstream debut in Bollywood after Lekar Hum Deewana Dil soundtrack, but then just vanished. This song served as the perfect comeback platform and his voice does justice to the song.

Rada, sung by Vishal Dadlani, Nakash Aziz and Shalmali Kholgade, is an out and out fun number. Fully of energy and beats, the song will surely be one of the songs you would want to put on loud volume and just dance. It’s adhinchak number and has the proper Mumbai street feel.

Vishal Dadlani and Nakash Aziz serve you a platter full of energy in Pee Paa Ke. This follows the same tone as Rada and has that Mumbai wala typical flavour. Pee Paa Ke is a percussion-heavy and upbeat song. The rap portion in the song will give that hatke feel and you’ll get set pee paa ke (wink).

Every album has that one sad song and in Banjo, it’s Rehmo Karam. Sung by Ajay Gogavale, this number has somber notes and just by closing your eyes and listening to it will take you to places. The song also might leave you teary-eyed. It’s a plea to the almighty and a cry from a broken heart at the same time. It starts off on a slow note and then picks up tempo and you get jitters while listening to it. Datta yeh tera kaisa hai rehmo karam hey raam – the lyrics by Amitabh Bhattacharya adds soul to the song.

The album ends with this yet another festive song – Om Ganapataye Namaha Deva. Sung by Nakash Aziz and Vishal Dadlani, the song is fast-paced and uses dhols and banjo. The song is a fusion prayer and you would feel like that you’re attending a live concert.

Verdict: In a nutshell, Ravi Jadhav’s Banjo gives the right platform to Vishal-Shekhar and they nailed it. The album starts off with full of energy and as it advances, slows down a bit and again ends on the energetic note. In terms of music, Banjo is already a hit and that Mumbai street flavour will make it top the charts.