Just when you thought it was safe to throw on your man-thong and head back into the water, here comes Camping 3 — the third installment in one of France’s most successful recent comic franchises, with the previous films raking in nearly 10 million admissions to date.

While the second part of the series was an over-budgeted, overblown mess, director Fabien Onteniente and star Franck Dubosc have tightened their waistlines for this occasionally hilarious and ultimately touching portrait of a quintessential loser trying to have some fun in the sun without changing his completely passé ways. With a whopping 400,000 viewers showing up on opening day, the movie is surely to become France’s summer jam, but it is unlikely to swim very far offshore.

You have to be French, or at least overtly familiar with French pop culture of the 1970s and 1980s, to get the majority of the jokes in this lively, very silly beachside romp, which once again features washout Patrick Chirac (Dubosc) and his band of trailer park-trashy vacationers, including the Alzheimer’s-ridden Jacky (veteran Claude Brasseur), his wife Laurette (Mylene Demongeot) and the now divorced Paul (Antoine Dulery). (Paul’s spouse was played by Mathilde Seigner in the last two movies, and one of the improvements here was to get rid of a character that never did anything remotely funny).

Like the other films, the third entry has Patrick and his buddies catching rays, hitting on girls, sipping on Pastis and basking in their utter beaufitude — the French term for provincial has-beens who seem to be forever stuck in a cultural time warp. Indeed, the reason why the Camping pics could never work or be remade Stateside is that, while the title in the U.S. invokes the great outdoors, in France camping is primarily seen as a lower-class vocation — a way for people who can’t afford villas on the Cote d’Azur to still spend their holidays by the sea.

Once again returning to Les Flots Bleus campgrounds in the French Southwest, Patrick has his summer break thwarted this time by three youngsters (Louka Meliava, Jules Ritmanic, Cyril Mendy) who crash his tent and ruin his annual routine, which mainly involves cavorting with the other regulars in an extra-snug Speedo. 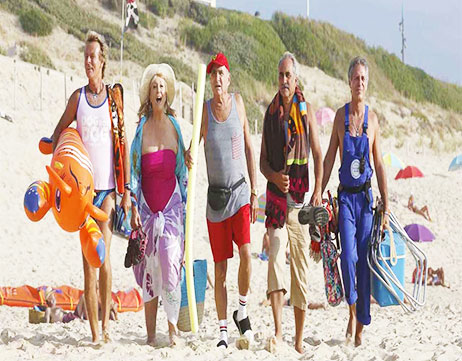 Compared to the last film, which got mired down in the mediocrity of its main characters, co-writers Onteniente and Dubosc were smart to include an exterior viewpoint with this trio of hip city kids coming face-to-face with Patrick’s low-cost, sexist, homophobic and out-of-whack ways, underscoring his sad and lonely lifestyle (several references are made to his unemployment) while pushing him to slowly come out of his perma-tanned shell.

There are some clever bits involving Patrick’s dated musical references, addictions to discount food products and inability to comprehend both women and social media, with Dubosc doing a good job playing someone stuck in the nostalgia of a bygone France that died somewhere in the mid-to-late 1990s. (Unlike many retro-driven French movies, the Camping franchise at least has the intelligence to point out that we’re often nostalgic about times which weren’t necessarily that great to begin with). 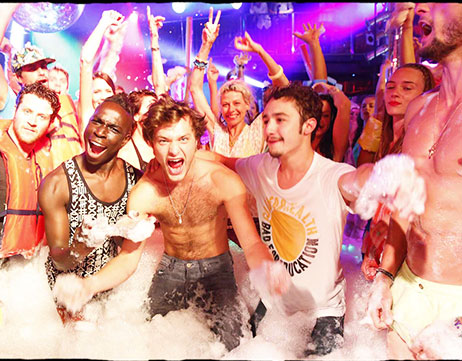 Other gags are very much in the Farrelly brothers vein, with one sequence of requisite male nudity and a standout scene involving a woman with a wooden leg (it’s funnier than it sounds). The tone can be rather cruel and perhaps mocking of a certain breed of Frenchmen, though at the same time there’s a real desire on the filmmakers’ part to eventually bring us to Patrick’s side, especially when he finds himself stuck with a family of drugged-out Parisian elites in the movie’s absurd and somewhat overwrought third act.

Onteniente’s direction can sometimes be garish, yet the comic timing here is mostly on point and his depiction of a certain social class extremely meticulous, with production design by Jacques Rouxel (Diplomacy) capturing the right blend of playful rustic cheesiness. Music by Jean-Yves D’Angelo, Michael Tordjman and Maxime Desprez keeps things upbeat, while an original track from Gallic rap sensation Maitre Gims adds to the summer fun.