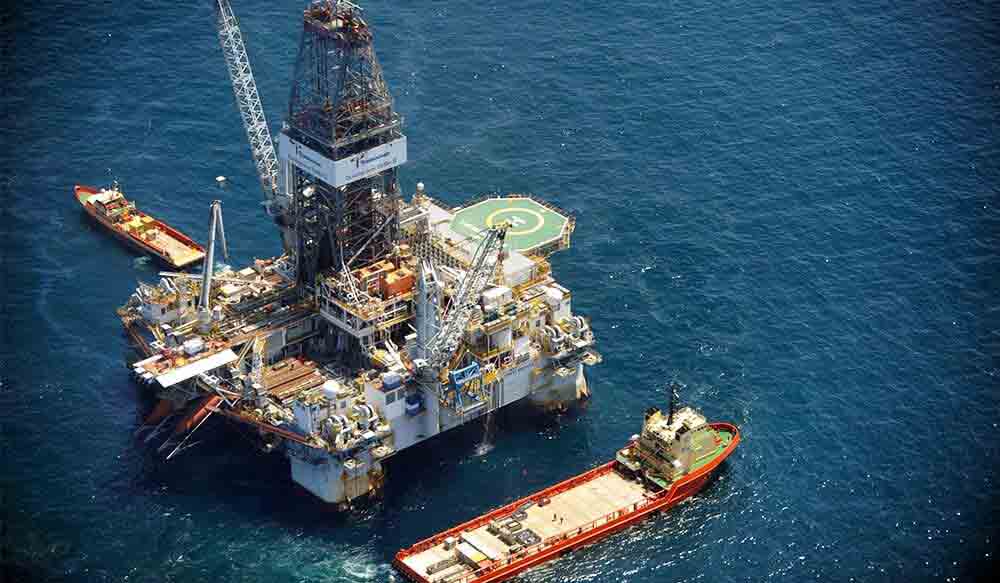 Peter Berg’s latest film, starring Mark Wahlberg, Kurt Russell and Kate Hudson, is about the massive explosion and oil spill in the Gulf of Mexico in 2010.

With all the explosions, gushing oil, fireballs, billowing smoke, crashing metal, airborne choppers, yelling and screaming and general pandemonium breaking out in all directions, you can barely understand a fraction of the dialogue in Deepwater Horizon. Given that what talk you do hear mostly has to do with stuff like pressure levels, mud displacement and test results, the lack of comprehension doesn’t matter a bit. All that counts here is that the film serve up a realistic, non-phony-looking, action-packed rendition of the worst oil spill in American history, and that it certainly does.

Building on their success with the muscular Afghan War saga Lone Survivor three years ago, director Peter Berg and star Mark Wahlberg deliver the goods again with a rugged drama about an incident that created an environmental disaster and a worldwide scandal. Populated by almost nothing but good ol’ boy characters, this Summit/Lionsgate title looks to pull in a wide general audience.

One measure of the creative team’s success here is that Berg and his collaborators have made a film that feels a good deal shorter than it actually is; it really does fly by, non-stop. After a nifty little homefront opening in which Wahlberg’s character’s wife (Kate Hudson) wants some morning action before her husband heads off to work on the rig for three weeks, precious little time is spent on personal issues. The writers and director know what matters here, and it’s not weepy subplots back on the mainland.

No, it’s all about what happened in April 2010 on British Petroleum’s enormous Deepwater Horizon oil platform 35 miles off the Louisiana coast in the Gulf of Mexico. The villain is apparent right away, he being BP executive Donald Vidrine (John Malkovich), a drawling bottom-line type who, because things are running behind schedule, insists upon going ahead with some tests despite doubts about their viability. 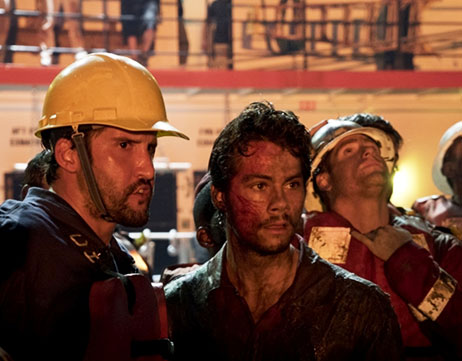 More dubious are the local workers, led by crew chief Jimmy Harrell (Kurt Russell) and chief electronics technician Mike Williams (Wahlberg), who of course put safety first. As usual, it’s the evil profit-minded bosses versus the little guys, which in this instance was exactly the case, and BP will never hear the end of it.

The pandemonium and excitement start up very quickly, with dials spinning over into the red zone, oil seeping up through the floor, bolts beginning to pop off their fixtures and, before long, water surging in and fire and smoke spreading to the rig’s chambers. And here, officially, dialogue stops mattering at all as the action takes over entirely.

The structure quickly becomes a towering inferno and, as soon becomes apparent, there’s no way to put this fire out. In a very effective bit of staging, Russell’s character is taking a shower in tight quarters when the fire reaches him, and what he suffers to extricate himself is excruciating and extreme. Berg and company proceed to dedicate themselves to elaborately illustrating the panic, confusion, massive exertion, extreme peril, general good judgment and intermittent heroism that resulted, miraculously, in just 11 people losing their lives, rather than many dozens more.

Illustrating this is what the rest of the film is all about. As the platform becomes increasingly engulfed in flames, rescue efforts by boat and helicopter are undertaken to the extent possible, although it remains a wonder that most people survived, given the hell on water that’s evident in nearly every frame. Although massive amounts of CGI were employed, Berg and company insisted upon building a facsimile of the relevant parts of the actual rig, which they did to 85 percent scale. This has paid off big-time in the vividly realistic feeling the film imparts.

The action just goes on and on, climaxing at the point where the last two people left on the rig seem to be Williams and young rig worker Andrea Fleytas (Gina Rodriguez). They’ll both be consumed by flames if they don’t jump in the water, but that’s very, very far down and she can’t face it. In a very effective moment, which serves as the film’s dramatic climax, he makes the decision for her.

For the public, the Deepwater Horizon incident represented perhaps the greatest greed- and big business-caused environmental catastrophe ever and, while the result is evident, the focus remains closely on the individuals who had to deal with the disaster and try to survive it. The film tells a simple, clear and straight-line story concerned specifically with the frontline grunts who, as usual, take the brunt of the punishment in a conflict or crisis. But it’s easy to fill in the blanks.

Ruggedness and resilience counts for far more in the characterizations here than does nuance, and everyone delivers as required. From a craft and technical point of view, the film is all but seamless, a credit to the extra care taken to avoid a CGI look.