Stephen Frears’s new film is based on a true story, but one of the biggest compliments it can be paid is that you wouldn’t know it. Florence Foster Jenkins feels less like a biopic than a classic postwar studio comedy – a pillowy paean to silliness, and the perfect antidote for sobering times.

That’s particularly appropriate given its subject: an American amateur opera singer whose voice brought joy to millions in the depths of wartime, largely because she could turn even the most graceful coloratura soprano line into what could only be described as a contaminated aria.

Foster Jenkins wasn’t famous because her singing sounded like a cat fighting a duck in a wheelie bin, but because she committed to it with the panache and depth of feeling of a peak-form Callas. Her records became instant collectors’ items, and her concerts sold out immediately. Five years before the French avant-garde got excited about art brut, Florence Foster Jenkins put musique brut on the stage of Carnegie Hall in New York City and gave two bucks from every ticket sale to charity.

Frears turns Foster Jenkins’s story into an Emperor’s New Clothes fable in reverse, in which everyone clocks exactly what’s going on, but realises that shouting out would only spoil the fun. It follows Florence (Meryl Streep) in late middle age as she approaches that life-capping Carnegie Hall gig, chivvied along by St Clair Bayfield (Hugh Grant), a modestly talented actor and her doting second husband.

Streep plays Florence as a seamless hybrid of dumpy arts-scene doyenne and excited schoolgirl: when she performs, she draws her elbows in close to her chest and occasionally twists very slightly from side to side, like the primary-school choirgirl who finally gets her moment in the spotlight.

And it’s pure Streep Soufflé – free from the weighty responsibility to imitate (as in The Iron Lady) or emote the house down (as in August: Osage County), she gives her most human performance since Nancy Meyers’s 2009 romantic comedy It’s Complicated, full of warmth that gives way to heart-pinching pathos.

But Florence isn’t the film’s centre of gravity. That duty falls to St Clair, who treats her with a kind of grandfatherly affection, while shielding her from the odd sling or arrow that makes it over the ramparts. For those of us who felt Grant was born half a century too late for the career he deserved, Florence Foster Jenkins will come as partial vindication.

He’s on preposterously good form here, gliding through every scene with a lightness and wit that’s completely Fifties, and perfectly in keeping with the film’s moreish, brandy-butter aesthetic. (The cinematographer is Danny Cohen, who gets the mid-century three-strip Technicolor look dead on, drawing out the chintzy beauty of Consolata Boyle’s costumes and Alan McDonald’s doily-ornate sets.)

The couple’s relationship is snuggly but sexless: when Florence says “I love you”, St. Clair’s reply (which Grant somehow makes genuinely sweet) is “Mmmm. With all the knobs on.” But she sleeps alone, and St. Clair keeps an apartment downtown with his mistress Kathleen (Rebecca Ferguson). The arrangement puzzles Florence’s accompanist Cosmé McMoon (Simon Helberg), but as St Clair points out, it works. 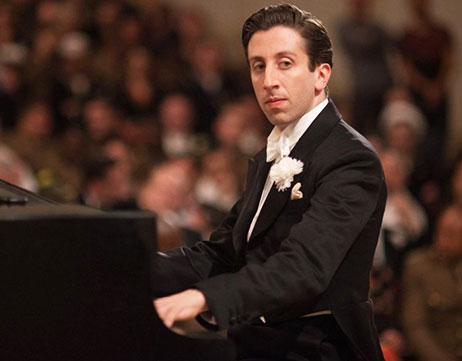 Florence’s rehearsal scenes have a gently escalating ludicrousness about them that’s totally winning, and a sequence in which she ends up being grabbed from behind by her vocal coach (David Haig) and all but ridden into tune is a snort-inducing comic vignette.

A visual gag involving potato salad and a line about antique chairs both smack of Preston Sturges at his loopiest, but both are grounded in truth. The script, by former TV writer Nicholas Martin, never quite gets up to screwball speed, but it knows an anecdote worth borrowing when it hears one.

The tone here is very different from Xavier Giannoli’s Marguerite – another recent film inspired by Jenkins’ life and music – which initially sided with the sniggering onlookers before finding unexpected transcendence in a third-act handbrake turn. Here, the film ushers you into Florence’s confidence and her snowglobe-like “happy world” that St Clair works so hard to keep from cracking.

File it alongside The Queen and Philomena as the final chapter in Frears’s unofficial Strong Women trilogy: a delicious, finger-tingling comedy about the creative instinct that makes your heart want to squawk with joy.