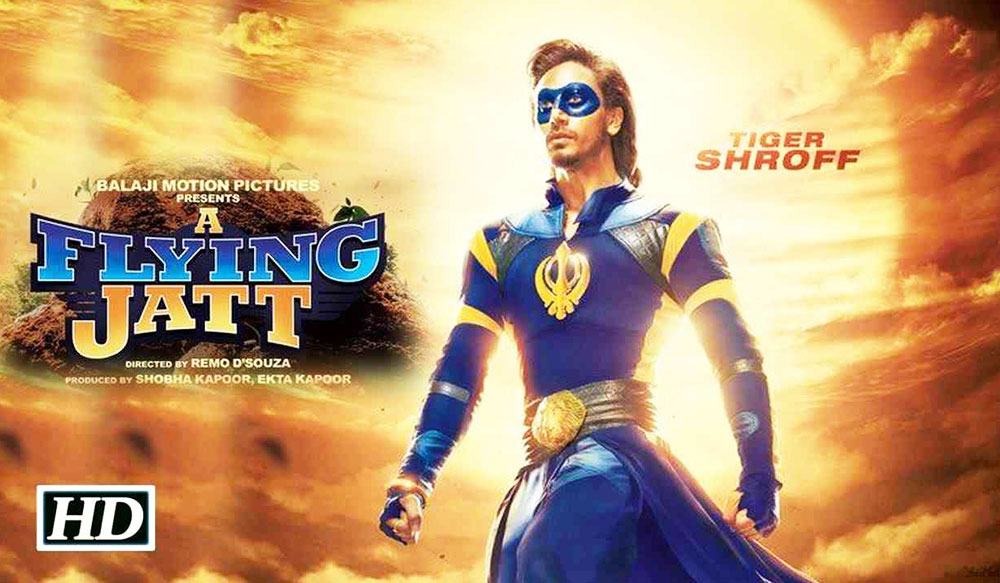 STORY: Aman fears heights, dogs and industrialist Malhotra who sends merciless Raka to grab Aman’s land – but what happens when Aman discovers his own superhuman powers? Can he defeat Raka – and the power behind him?

REVIEW: So, straight away, the best thing about A Flying Jatt is the fumbling Jatt played by Tiger Shroff. Wicked industrialist Malhotra (Kay Kay) wants Aman’s family’s lands, which hold a sacred tree, for his polluting industries. Aman’s mother, Mrs. Dhillon (Amrita), ferociously opposes Malhotra – but Aman quakes before him, intimidated by most things on earth, including his own martial arts students.

Can Aman ever stand up to Malhotra and his huge henchman Raka (Nathan) – and can he fight his own fears?

Tiger does a neat job as Aman, shivering superhero who fights crime but also buys ‘do kilo lauki’ on the way home. Tiger’s evolution, from a kind but confused kid on the block, to a focused and fierce fighter, comes across well as do the film’s light moments, including Aman as ‘Sunny Leone’. Amrita Singh, literally playing a Tiger Mom, displays feisty panache, berating her son for having ‘dole-shole, no jigra’, delivering wisdom with slaps and guzzling drinks galore. The banter between her, Tiger and Aman’s fun-loving brother Rohit (Gaurav) is fresh good fun.

Jacqueline Fernandez will be seen as the leading lady performing dance steps with his co-star in the teaser. In Dishoom Jacqueline Fernandez gave us glimpses of what she might be when she is treated as more than a showpiece. She is back to the dolly routine in A Flying Jatt, playing a bespectacled Barbie with constantly widened eyes, who does not speak, but squeaks. She comes into her own only while dancing to ‘Beat pe booty’.

And there lies the trouble with A Flying Jatt – the full, stark shebang of a superhero versus super-dark powers never comes through. The villains remain cardboard cut-outs and the clash grows predictable. These thrills don’t chill. On the upside, for children, A Flying Jatt provides clean entertainment – with its innocence, it evokes more ‘’Haathi Mere Saathi’’ and less cool-cat Krrish. The film takes off only because of its simplicity – a flying jatt who’s afraid of heights, a rarity in dark times of Udta Punjabs.