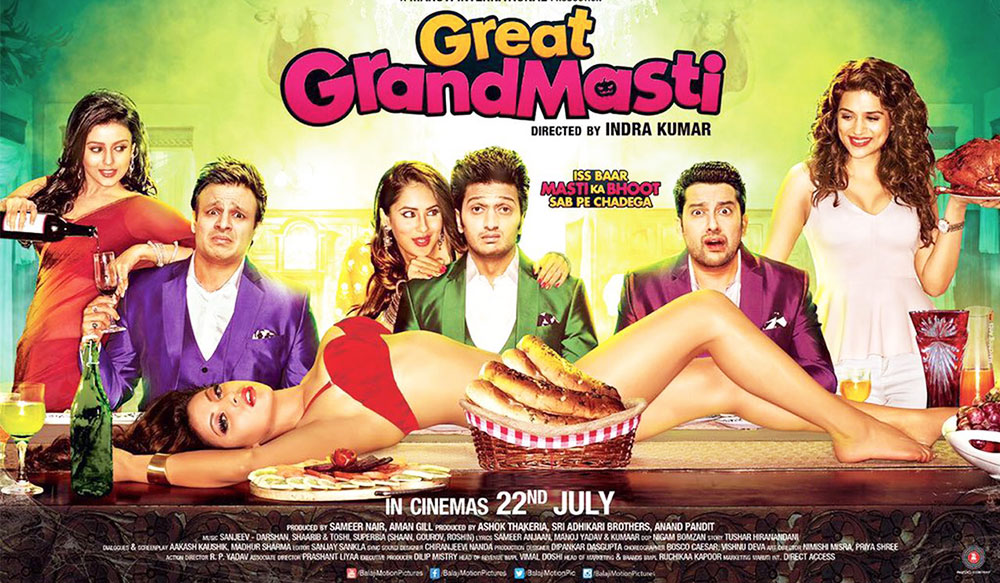 STORY: Meet (Vivek Oberoi), Prem (Aftab Shivdasani) and Amar (Riteish Deshmukh) are frustrated in their marriages and take a vacation to Amar’s village Dudhwadi to sell his ancestral property. Little did they know that a haunted palace, an alluring ghost and havoc awaits them there.

REVIEW: Two films later, the Masti franchise has made the audience familiar with its template. How the monotony of marriage makes three buddies seek for some harmless fun, has proven to make for a few good laughs and a lot of moolah. Even in its third stint, the naughty popcorn entertainer offers ample chuckles sticking to the raunchy premise.

Director Indra Kumar plays on the plusses of his cast. He banks on the crackling camaraderie of Vivek, Aftab and Riteish. The three of them are loud but sincere. Their bromance and escapades (did we mean sexcapades?) doesn’t fail to tickle your funny bone. Urvashi Rautela (Yamaha Fascino Miss Diva-Miss Universe India 2015) delivers on every count. She is easy on the eyes, ups the oomph quotient, dances like a dream and has a catchy chemistry with the boys.

Kumar and his writers whip up a story about their tryst with the ghost of ravishing woman who died a virgin. She seeks sex to attain Nirvana. It could’ve been a lot funnier with some better writing.

The director makes his men stay dedicated to the goofy gags, which they pull off effortlessly. The lame innuendos, the silly jokes and humour about the genitals are ju diciously packed into the script. Some of them will get you laughing and others might make seethe with rage. Be prepared to bear a lot of overacting. Aftab seems possessed by the spirit of Ranjit (he even sounds like him).

For those who have a taste in adult comedies, Great Grand Masti is a fun weekend watch and one of the better ones we’ve seen this year. Go guffaw!