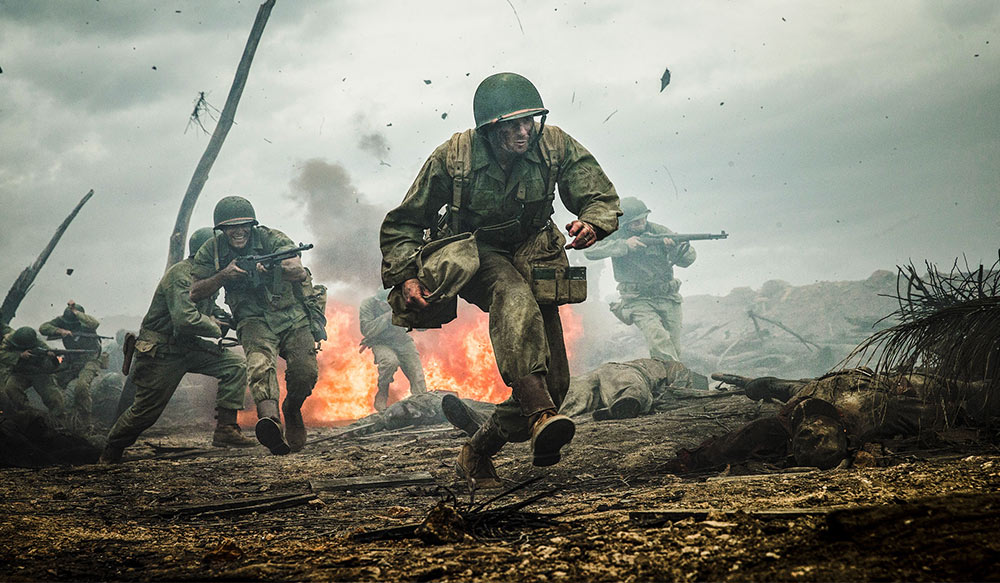 Mel Gibson is back, directing the bloody hell out of a war movie about peace. You may have issues with the star’s past history of anger and intolerance. But you’ll have no issue with Hacksaw Ridge, a movie about a different kind of brave heart. It’s the fact-based, World War II story of Private First Class Desmond T. Doss, the first conscientious objector to receive the Congressional Medal of Honor. Andrew Garfield, in the best performance of his career to date, plays Desmond, a feisty kid out of Virginia’s Blue Ridge mountains who swears never to pick up a gun (he almost killed his daddy with one) and swears just as vehemently to go into combat as a medic. How does this cornstalk-skinny pacifist, a devoted Seventh-Day Adventist, enter the front lines where you shoot to kill just to stay alive?

That’s the heart of the film that Gibson directs with no-bull sincerity from a script by Robert Schenkkan (The Pacific) and Andrew Knight that digs past clichés to touch a raw nerve. Desmond’s father, Tom (a superb Hugo Weaving), is so traumatized by his service in World War I that he forbids his sons to enlist. The boys, who’ve have no problem defying Dad when he drunkenly abuses their mother, Bertha (Rachel Griffiths), defy him again. Desmond’s brother Hal (Nathaniel Buzolic) enlists soon after the Japanese bomb Pearl Harbor. And our hero, though crazy in love with Dorothy (the excellent Teresa Palmer), a nurse at the hospital where he gets medical schooling, is determined to follow.

Basic training takes on new layers of meaning as Desmond shirks no duty, except for rifle practice. That decision angers both Sgt. Howell (Vince Vaughn, doing gruff) and the fellow recruits, who mistake his principles for cowardice. Attempts are made to drive this renegade out of the Army, even using the threat of court-martial. Desmond’s dad turns up in an unexpected defense of his son. It’s a tribute to Garfield’s total commitment to the role that he never lets easy sentiment color the force of the character’s convictions.

Not surprisingly, it’s the scenes of battle that send Hacksaw Ridge roaring to life, with Gibson and cinematographer Simon Duggan refusing to flinch from the harsh realities of ground warfare. The rocky slope from which the film takes its title is the Japanese stronghold that Desmond’s battalion must destroy before they can take Okinawa. Gibson captures the most brutal and bloody screen carnage since his own Braveheart and the opening sequence of Steven Spielberg’s Saving Private Ryan. And it’s here that Desmond, staying behind as his troops are forced to pull out, repeatedly returns amid bullets, bombs and grenade blasts, to round up wounded soldiers, 75 in all, and lower them by rope down the ridge and to safety.

Thanks to some of the greatest battle scenes ever filmed, Gibson once again shows his staggering gifts as a filmmaker, able to juxtapose savagery with aching tenderness. There’s always been more than an adrenaline rush in his work: Look at Braveheart (for which he won the Oscar as best director), The Passion of the Christ (the most successful R-rated indie film of all-time) and the masterful, misunderstood Apocalypto, released a decade ago – i.e., roughly about the time LA cops got him on a DUI and his rants put him in the public doghouse. Hacksaw Ridge is being touted as Gibson’s comeback. Is it also an atonement? Who can say? What’s clear is that Gibson has made a film about family, faith, love and forgiveness all put the test in an arena of violent conflict – a movie you don’t want to miss.