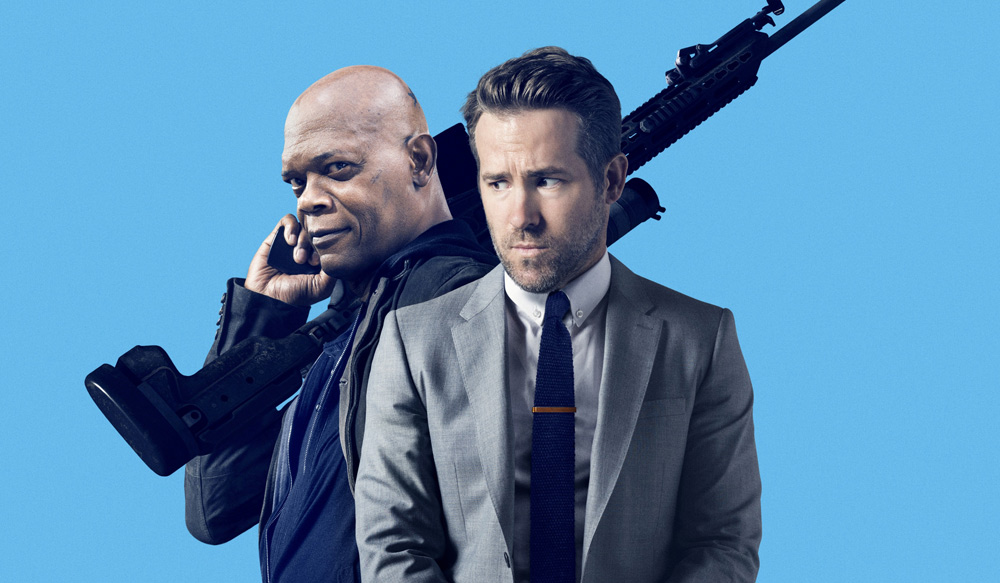 Right out of the gate, let’s be clear: “The Hitman’s Bodyguard” is not necessarily a good movie. “Guilty pleasure” is more like it.

With its countless hand-to-hand fight scenes, serial car chases full of explosions and bullet-perforated sheet metal, and nearly nonstop shootings (the blood-squib budget on this thing must have been sky high), “Hitman” is, in essence, a generic action picture.

Its title is its plot. A down-on-his-luck professional protection agent (Ryan Reynolds) is assigned to deliver a killer (Samuel L. Jackson) to the International Criminal Court at The Hague to be a witness against a mass-murdering Slavic dictator (Gary Oldman, not trying very hard).

Standard stuff. But it’s got more humor and zest than most movies of its kind. And that makes it pretty darn enjoyable.

What sets it apart are the performances of its leads and also Salma Hayek. These three seem to be enjoying themselves immensely, Jackson especially. He’s playing perhaps the most Samuel L. Jackson character ever: intense, sardonic and effusively foulmouthed. His signature 12-letter cuss word falls from his lips with such frequency that Reynolds’ character gets in a sly meta-dig, observing, “this guy single-handedly ruined the word.”

He’s mocking his bodyguard. He’s offering him unsolicited advice on the bodyguard’s forlorn love life. He’s laughing. He is, so help me, singing, often, once in a van full of cheery nuns, and also over the end credits. And he sounds pretty good.

He appears to be having the time of his life.

Spouting that word as well is Salma Hayek, playing his wife, who delivers the epithet with ferocious gusto. Lie down with Sam, get up with a potty mouth.

Her character is a real toughie, and their meet-cute moment is a flashback scene showing her winning a bar brawl while Jackson looks on in reverent, loving awe.

Reynolds is playing what amounts to the straight man to Jackson’s bad boy, and the back-and-forth between the two, with his character stewing and steaming in exasperation at the killer’s taunts, gives “The Hitman’s Bodyguard” its special fizz.