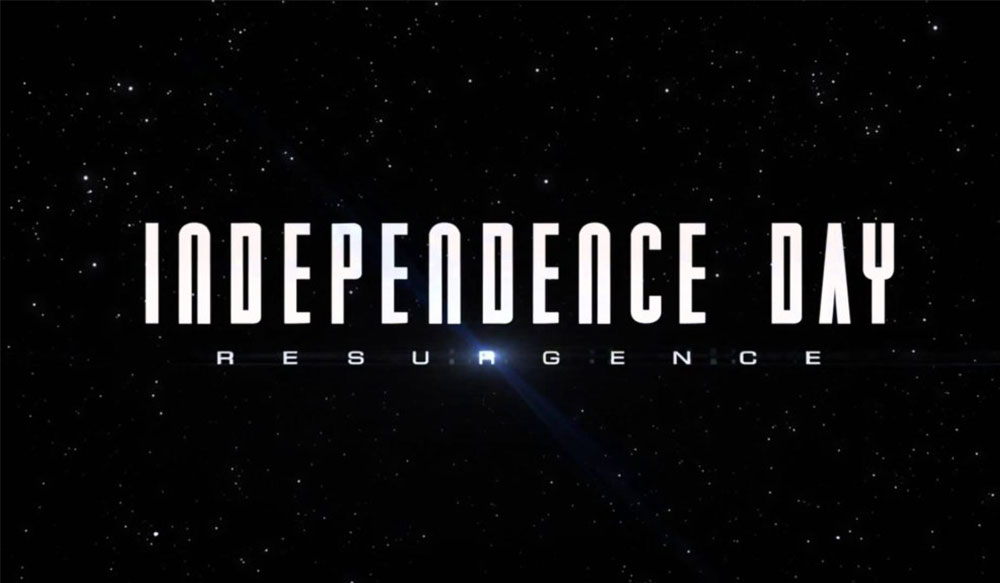 This scattershot but frequently spectacular sequel sees Roland Emmerich reclaiming his title as the DeMille of global destruction.

“We had 20 years to prepare… so did they,” states the tagline of “Independence Day: Resurgence,” a cheerfully ludicrous re-encounter of the third kind that doesn’t show any particular evidence of all that planning. Sketchily conceived in all departments but its sensational, more-is-more visual effects — which is, let’s be honest, where its efforts should be concentrated — this belated, cluttered sequel to the 1996 smash “Independence Day” breaks far less ground than its alien invaders, but confirms director Roland Emmerich as modern cinema’s most spirited conductor of popcorn chaos.

Perhaps excessively concerned with burnishing the supposed legacy of its predecessor — a distant memory, if that, for much of its target audience — this cinematic Big Mac entertains abundantly on its own second-hand merits. While unlikely to become the pop-cultural behemoth “ID4” was two decades ago, “Resurgence” should cast a sizeable shadow over its box-office competition.

Nostalgia, as they say, is not what it used to be. When “Independence Day” nuked all before its path in the summer of 1996, it registered as a buffed-up sci-fi twist on the heaving, heavily populated disaster spectaculars of the 1970s, prompting a wave of similarly muscle-headed, brink-of-doom epics in its wake — including a couple more by Emmerich himself. In 2016, however, the chief point of reference for “Independence Day: Resurgence” is “Independence Day” itself, even as its narrative and aesthetic (now in postmillennial 3D) provides a handy summation of the Hollywood blockbuster’s evolution over the last 20 years: Just as the “ID4” influence has been detectable in everything from “Armageddon” to “Pacific Rim,” so are those successors reflected in Emmerich’s latest.

Whether our collective memory of “Independence Day” is quite as treasured and detailed as “Resurgence” imagines it to be is another question. Its rather scattered screenplay — written by five hands, where the 1996 film managed with two — forges a dense network of callbacks to established events and characters, in certain cases via next-generation newbies. The previous film’s hero, Will Smith’s fighter pilot Steven Hiller, has passed on in vague circumstances, succeeded by his strapping son Dylan (Jessie T. Usher); also following a noble military path is former first daughter Patricia Whitmore (Maika Monroe, replacing Mae Whitman), whose dad (a silver-bearded Bill Pullman) is addled by trauma from the attack of 1996 — since which time, steely new U.S. president Lanford (Sela Ward) dubiously informs us, “We have had no armed conflict.” “Resurgence” may notionally be set on planet Earth, but it plainly takes place in a parallel universe.

Joining the new guard, and seemingly assuming the lead role for further franchise entries, is Liam Hemsworth as Jake, a renegade pilot with all the palatable roguishness and toothy luster of “Top Gun’s” Maverick Mitchell; while he’s not a blood relative of any known characters, we’re informed that he was orphaned in the first alien attack. As the skies darken and ominous extra-terrestrial signals are received ahead of the July 4 holiday, will these plucky kids kick enough alien ass to do their folks proud? Even if we had the inclination to care, we hardly have the time, as the writers race to cram in a surfeit of storylines, many of them involving returning players. 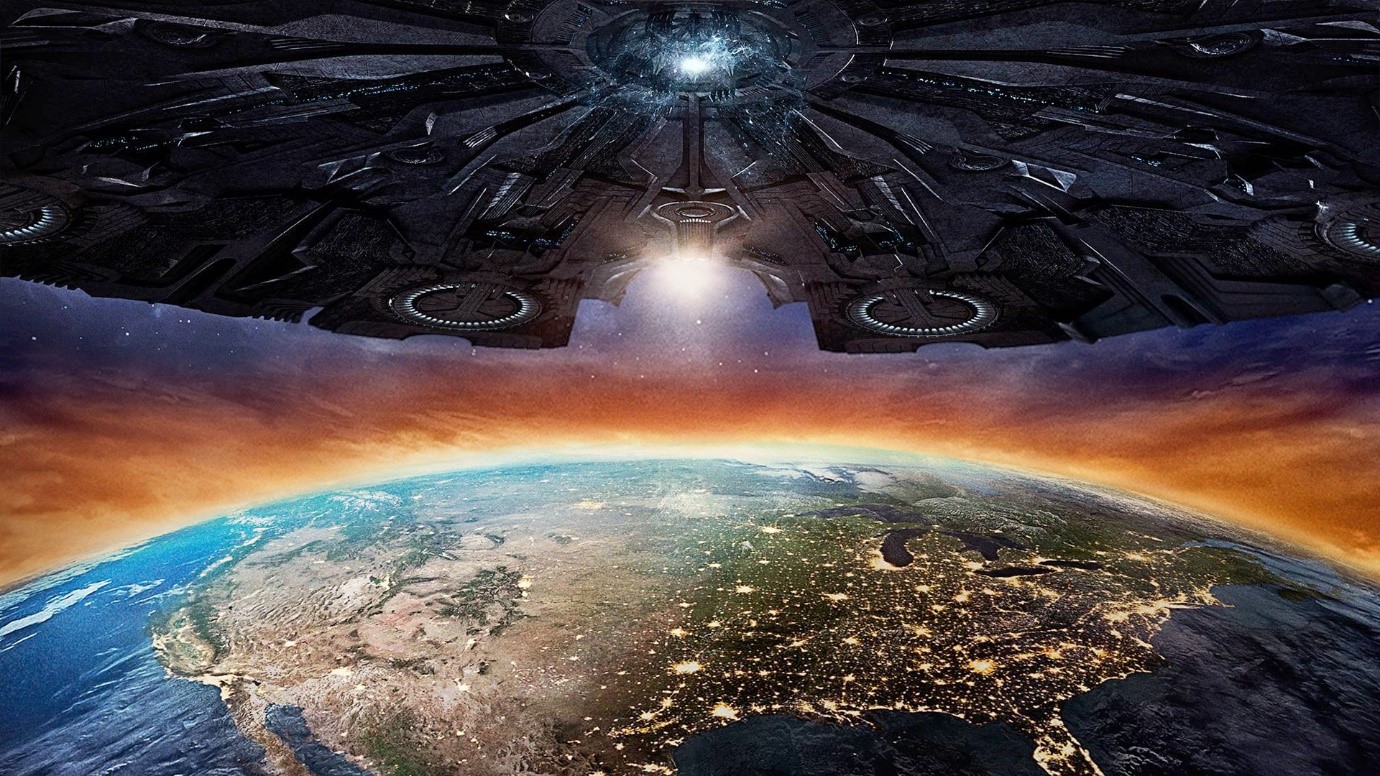 Satellite engineer David Levinson (Jeff Goldblum) is back on hand to spearhead the scientific investigation of the encroaching enemy, as a 3,000-mile-wide mothership looms over the planet. His calls for caution are overruled by the trigger-happy new POTUS — though if “Resurgence” has any liberal political subtext to offer, that’s cancelled out by its own gleeful firearm fetish. (“This thing is way cooler than a machete!” exclaims a federal accountant-turned-fighter upon his first handling of a super-sized alien blaster.)

Meanwhile, eccentric scientist Brackish Okun (Brent Spiner) awakes from a 20-year coma to face the fresh wave of invaders, and former President Whitmore is plagued by psychic interference from their many-tentacled, near-indomitable leader. Elsewhere, Levinson’s father Julius (Judd Hirsch) is entrusted with ferrying a school bus of children to safety through the wreckage of the aliens’ first strike — an early fiesta of flaming effects work that renders incidental the eradication of several non-American cities. (Between this and “London Has Fallen,” the Big Smoke is having a mighty tough time of it at the movies this year.)

Hardly any of these narrative strands are consistently sustained or resolved, making afterthoughts of such players as Charlotte Gainsbourg (vying with recent “Godzilla” star Juliette Binoche for the title of Most Incongruous Thesp in a Multiplex Explosion-Fest) as an earnest psychiatrist and equivocal love interest for Goldblum, and Chinese singer-actress Angelababy, as an apparently renowned fighter pilot who nonetheless merits but a handful of non-onomatopoeic lines. (No prizes for guessing that women draw the script’s shortest straws: As the new commander-in-chief, a glamorously glowering Ward gets a fraction of the action Pullman’s president did, before bowing out unceremoniously.) The film may clock in just shy of two hours — in this age of Marvel bloat, a feat of relative economy on editor Adam Wolfe’s part — but its amiably distracted structure makes it seem longer than the 145-minute “Independence Day.”

Even if its storytelling occasionally tests patience, however, “Independence Day: Resurgence” delivers swiftly and generously when it comes to the goods most viewers will have come for — the time-honored joys of blowing stuff up, in set pieces that escalate dizzyingly in size and context. Whether visualizing a swarm of fly-like fighter jets peppering a gurning alien queen with fluorescent artillery, or a blazing East Asian freeway giving up its grip on gravity, Emmerich has a natural showman’s command of his script’s most dumbly fantastical demands; he may know no restraint, but he also knows where no restraint is required of him. Landing less than a year after the well-intentioned dramatic flub of “Stonewall,” the aptly named “Resurgence” is nothing if not a reminder of where his gaudy sensibility is best accommodated.

Most crucially of all, Emmerich has a classicist’s appreciation of tactility and scale: He’s the DeMille of global destruction. Where many of today’s superhero epics bear a plasticky digital finish that diminishes their on-screen heroism, there’s something genuinely, boomingly imposing about “Resurgence’s” largest visual coups, dreamed up by as many as nine of the industry’s top effects houses, typical of the film’s no-expense-spared immoderation. 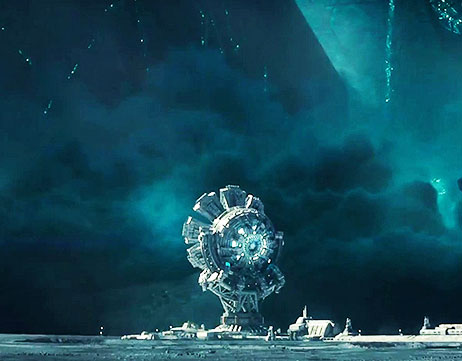 The work may be state-of-the-art, but there’s something in its near-tangible surfaces — the mottled, blackened underbelly of the hovering alien craft, like a tar-varnished omelette, or the saliva-slick scales of the visitors’ own skin — that seems reassuringly non-virtual, devised as easily in 1996 as in 2016. One could criticize “Independence Day: Resurgence” for being so of a piece with its predecessor, for following its template as efficiently and dutifully as it sets up a third installment  — one that will be far less long in the making. But whether or not you’re invested in the film’s nostalgia for itself, there’s something comfortingly old-school about its excesses: It’s the end of the world, still very much as we know it.