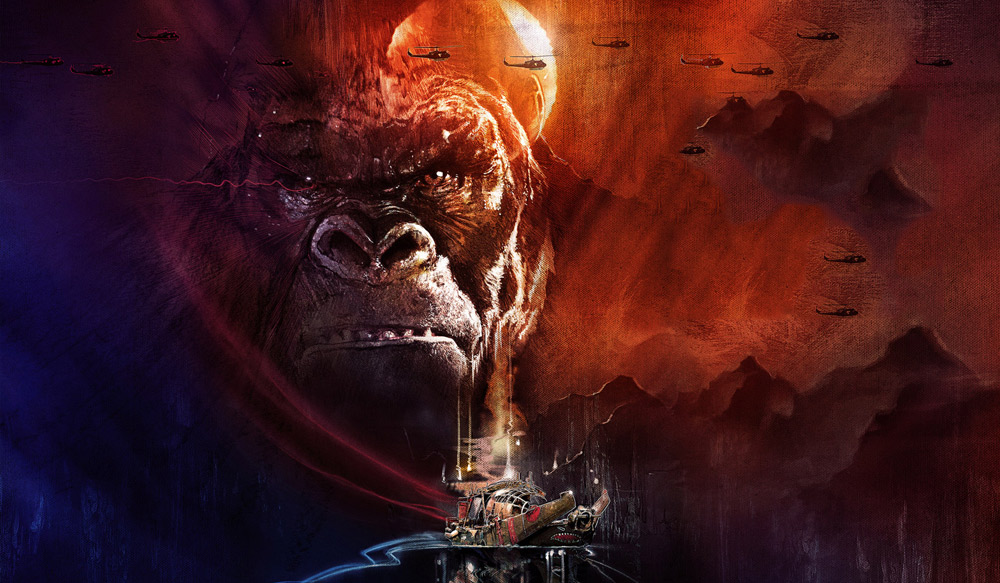 King Kong is back – All hail the King! The legendary cinematic character which first appeared on our screens in 1933, is back in Kong: Skull Island, a King Kong reboot directed by Jordan Vogt-Roberts and featuring a talented all-star cast. This is the seventh official remake of the original film, but it reimagines the origins of the world-renowned ape in a unique and compelling way.

The movie takes place in 1973, right after the Vietnam war has ended and the American troops are retreating. A group of veteran fighters led by Colonel Packard (Samuel L. Jackson), including the British tracker, Conrad (Tom Hiddleston) and the photographer, Weaver (Brie Larson) along with scientists decide to go on an exploratory mission of their own. John Christopher Reilly excels in his role of a World War II pilot, Hank Marlow, who’s been stranded for years on the island that the team land on.

The earlier Kong stories normally showcased the mythic Kong in his natural habitat first then his uprootal to the civilized world where he clashes with mankind. But in this reboot, Kong stays on his ground throughout the entirety of the film where he not only faces the sheer folly of mankind as a small group of individuals try to invade his territory and spread anarchy but also a horde of menaces from his own land. The mysterious prehistoric ‘’Skull Island’’ is swarming with a plethora of threatening species. This is a truly excellent ‘monster movie’ made with meticulous care that help present the film as a visual feast for fans of this genre.

The brilliantly rendered Kong makes you forget that he is a computer-generated character as it outshines the human cast of the film. The movie is very entertaining with tons of action, a great amount of adventure and a healthy dose of humor. The astonishing CGI effects combined with the incredible cinematography makes it visually splendid. All the creatures are remarkably well designed and detailed; Kong looks majestic while the skullcrawlers and other creatures look highly convincing and realistic.
If you wish to experience an impressive cinematic adventure with the glorious King Kong and other massive hostile beasts, this movie is for you!