The Legend of Tarzan Returns More Epic Than Ever

Home > article > The Legend of Tarzan Returns More Epic Than Ever 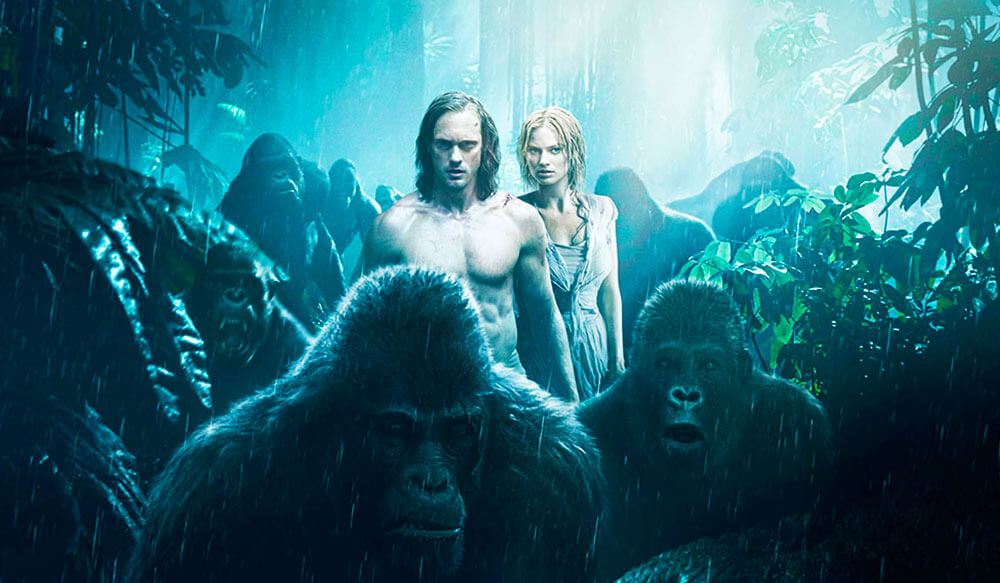 After the creative and financial short-falling of numerous recent big-budget franchise films (the latest tanker, Independence Day: Resurgence) and the ill fortune Warner Bros. has lately suffered with several expensive intended tentpoles (The Man From U.N.C.L.E., Pan, Batman v. Superman: Dawn of Justice), it comes as something more than a mild surprise that The Legend of Tarzan isn’t half-bad; actually, it’s pretty good.

Beautifully made and smartly set at the beginning of Belgian King Leopold II’s rapacious colonization of the Congo in the 1880s, this is certainly the best live-action Tarzan film in many a decade (which, admittedly, isn’t saying much) and offers a well-judged balance of vigorous action and engaging-enough drama. David Yates’ first directorial outing since capably overseeing the final four Harry Potter installments (his Potter follow-up, Fantastic Beasts and Where to Find Them, opens Nov. 18) looks to swing to brawny mid-summer box-office returns internationally.

Edgar Rice Burroughs’ white boy raised by apes in the African jungle probably starred in as many or more movies than any other fictional character from the dawn of cinema through 1960, after which the vine-swinger was largely relegated to television. Since then, big-screen filmmakers have been more uncertain about how to deal with the muscular wild child uncorrupted by society, increasingly due to changing attitudes and sensitivities about the depiction of colonialism, tribal Africans, a white naif saving the day, et al.

The most financially successful modern take on the tale remains Disney’s animated 1999Tarzan, the most serious has been Hugh Hudson’s stately Greystoke: The Legend of Tarzan, Lord of the Apes in 1984, and the most ridiculous was unquestionably John Derek’s 1981 Tarzan, the Ape Man, in which the director was far more interested in photographing his wife, Bo, in multiple stages of undress than in training his lenses on the title character.

Yates and screenwriters Adam Cozad and Craig Brewer allow no such distractions to get in their way here, as they deftly apply Tarzan’s jungle-learned know-how to the cause of fighting a real historical evil, that being Leopold’s enslavement of locals and exploitation of his massive new central African colony. At the same time, there are certain moments when this feels like a 19th century ancestor of James Bond, beginning with the presence of Christoph Waltz as the main villain and abetted by multiple action sequences involving moving vehicles. 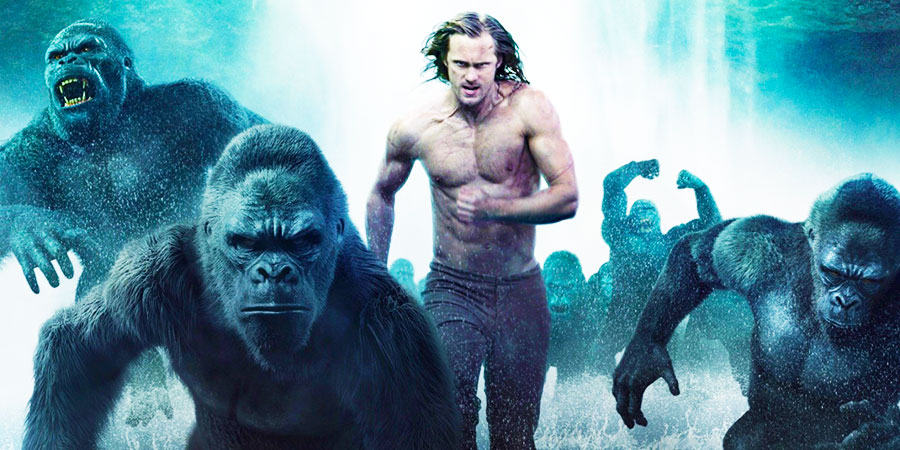 At its best, the film achieves what its makers clearly set out to do, to create a sweeping adventure that embraces the old in a new way. Many of the trademark tropes are present: giant apes making off with a white baby boy and teaching him the ropes, so to speak; the removal of the adult Tarzan (Alexander Skarsgård) to England to awkwardly assume his position as the wealthy Lord Greystoke; his marriage to beauteous Jane (Margot Robbie); the lure of precious diamonds that attracts unsavory characters to the jungle; and Tarzan’s eventual fierce defense of his boyhood home and those he, and his wife, grew up with.

Along with the deserved branding of Leopold as the ne plus ultra of colonialist evil, the new revisionist aspects also prominently include the presence of a black American “diplomatic envoy,” George Washington Williams (Samuel L. Jackson), in London to persuade Lord Greystoke to accompany him to Africa to find out what Leopold’s really up to down there.

The writers and director adroitly juggle the tricky job of propelling the main story forward while also sketching in sufficient backstory for Tarzan and Jane. In this telling, the latter is a sharp-minded, American-accented blonde who, like her husband, was raised in Africa. Far from being a tag-along wife, this Jane is a knowledgeable woman of the world with a deep feeling for the people and culture she grew up with and, thanks in part to Robbie’s spirited performance, is probably the most plausible of all the main characters. 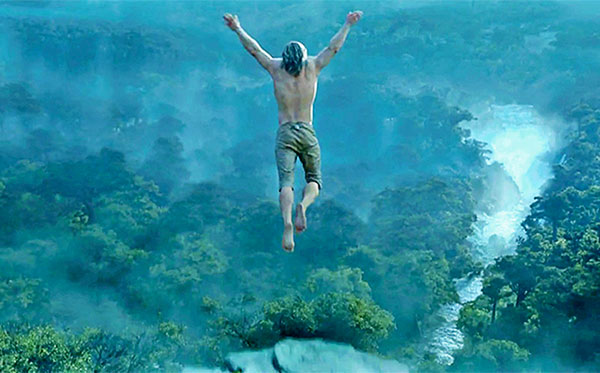 This is useful since she’s the one, rather than her husband, who ends up a hostage in the hands of Waltz’s nasty Leon Rom, whose original idea was to lure Tarzan back to Africa with the intention of trading him to a tribal chief (Djimon Hounsou) with a lifelong grudge against Tarzan; in exchange, Rom would receive a vast cache of diamonds to help finance Leopold’s African exploits.

So, with a few native companions and the slower-moving Williams in tow, Tarzan sees his journey turned into a mission to rescue his wife, giving all the participants abundant motivation for their strenuous exertions. During this long middle stretch, there are numerous lovely moments involving animals — lions, primates, water buffalo, elephants, crocs and more, all of which were computer generated, superbly and naturalistically so — Jane’s sweet reunion with the villagers who helped raise her and extensive scenes shot on fabulously diverse and hitherto unseen locations in Gabon, where the filmmakers spent six weeks. It’s a pictorially gorgeous work, with particular kudos due to cinematographer Henry Braham and veteran production designer Stuart Craig, who, ironically, performed the same job on Greystoke 30 years ago.

The film maintains a vigorous pace through pursuits on a slave train (a major project of Leopold’s) and river steamer, letting down somewhat only at the climax at a large interior military base and town; given all that’s come before, the final minutes have a comparatively soft and rote feeling. 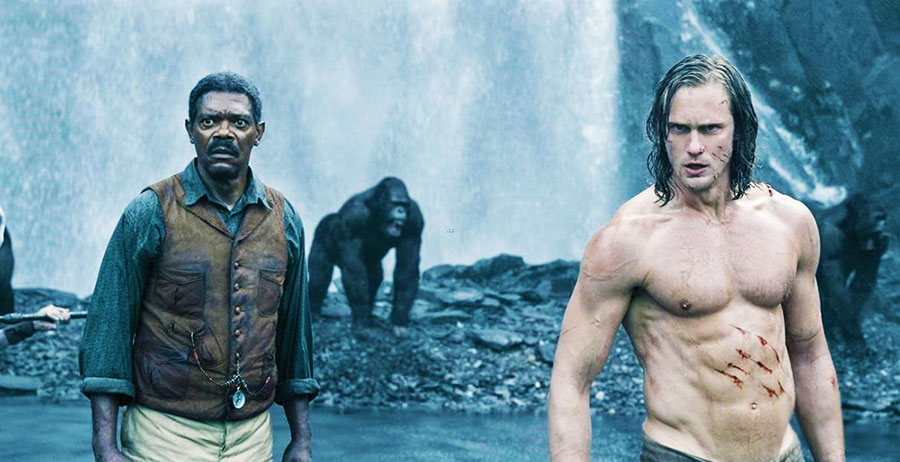 The other fuzzy point, unfortunately, is the portrayal of Tarzan, both in conception and execution. As Lord Greystoke in England, he’s stiff and rather out of his element. Once he gets back to Africa, he seems more at ease, but both the conception and portrayal of the character remain narrow and one-note. Physically, Skarsgård is a striking, and different, sort of ape-man; tall and lithe, he carves out a very vertical figure, even down to his unusual abs, which are cut up-and-down rather than layered horizontally. He’s also good in his African reunion moments. But emotionally he remains remote and uninvolving, his eyes, face and voice only modestly registering whatever might be going on inside.

Jackson, playing a former Indian fighter and Civil War veteran, gets to proclaim topically modernist lines such as “Mexico was bad but what we did to the Indians …,” and “We ain’t better than these Belgians,” while Waltz plays his villain with pure cold blood, as a man who doesn’t even feel he needs to lay on the charm to disguise his evil designs.

The top-billed producer here, the late Jerry Weintraub, started development of this project in 2003 and went through any number of scripts, directors (from Guillermo del Toro to Stephen Sommers) and proposed stars (swimmer Michael Phelps, Tom Hardy, Henry Cavill, Charlie Hunnam). Those he and his successors finally settled on to bring Tarzan back to the big screen have done pretty well.