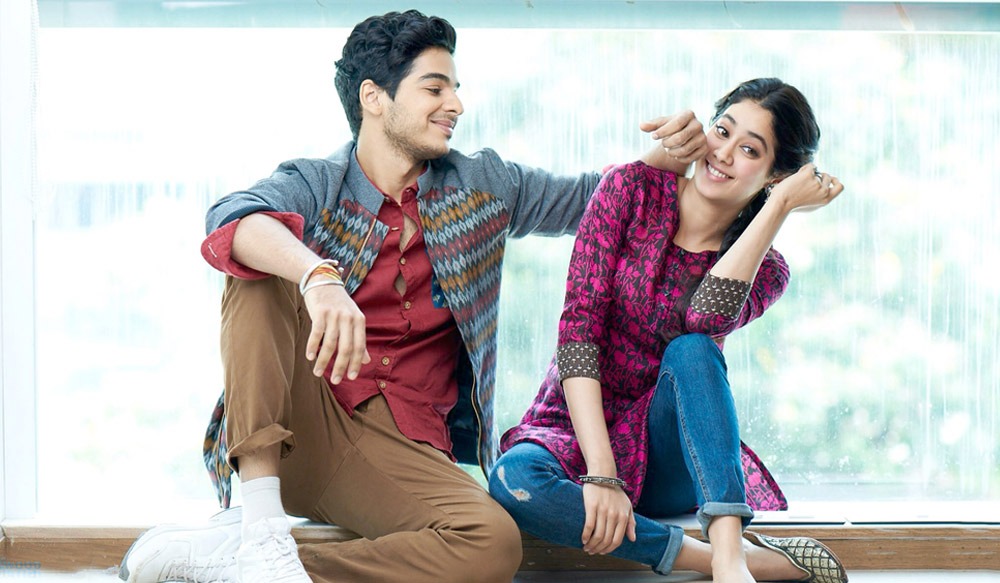 Dhadak which also means Heartbeat (translated from Hindi), is a 2018 Indian Hindi Language tragic romance film written and directed by Shashank Khaitan. Dhadak is also a remake of a Marathi Movie called “Sairat”. The movie follows Madhukar (Ishaan) and Parthavi (Janhvi), who fall head over heels in love with each other, but the fact that they belong to different castes of society, becomes an obstacle in their romance. The lovers dare to go against societal norms and fight against all odds for the sake of love. Dhadak is a simple, passionate story about first love.

It all starts when Madhukar, equally known as Madhu Bhagla, a young college student upbrought from a middle class family, has won a competitive eating contest and was rewarded by Parthavi Singh. Parthavi Singh is a strong, rich, independent girl from a political family. Both Madhu and Parthavi study together in the same college. One fine day at the lake, Madhu’s friend Purshottam noticed Parthavi bathing in a lake and he informed Madhu as well. Later on, the two begin to have feelings for each other, but are unaware of it.

Madhu goes back to his family dhaba, a roadside food stall where his father makes him to promise to stay away from Parthavi since she belongs to a powerful, opulent upper-caste family. Keeping this in mind, Madhu starts ignoring Parthavi at college. Nevertheless, Madhu was caught stalking by Parthavi herself and they then accept the fact that the both are in love with each other and thus begins to meet secretly.

Further in their relationship, Madhu asks for a kiss, but instead she dares him to come at the birthday party of her brother Roop. They meet at Parthavi brother’s place where they both kiss passionately but then the entire scene changes as they are caught red handed by Parthavi’s family members. Madhu and his friends are badly thrashed by the brother and father of Parthavi who are politicians. However, they asked the inspector to wait for the election results before any severe action.

Once the elections were over, Madhu and his friends were arrested on false charges by Parthavi’s father. Parthavi pleads with her father on releasing both Madhu and his friends, but in vain. She then takes out a gun and points it to her head, threatening to shoot herself if Madhu is not freed. Once freed, Madhu runs up to her and together they elope. They are then followed by policemen, but Madhu and Parthavi board a train to Mumbai, where Madhu contacts his maternal uncle, and makes their way to Nagpur.

On reaching Nagpur, they were both advised to go and reside in Kolkata for the time being. They travelled to Kolkata where, they rent a small room. They even start working whereby Madhu works in a roadside restaurant and he learns Bengali, whilst Parthavi starts working in a call-centre.

Upon receiving his first salary, Madhu goes to meet Parthavi , to gift her a new phone at her office. To his surprise, he sees Parthavi being happy with her manager and this annoys the hell out of him, leading him to believe that she is cheating on him. Heartbroken and in despair, he returns back home. Once she reaches home, they both argued gravely, where Madhu slaps Parthavi. At that moment, Parthavi starts to doubt whether she has made the right decisions by eloping with Madhu. She goes missing but is found in her office again. At that moment, Madhu realises that he is truly in love with Parthavi and therefore proposes to get marry. Following this, they then both get married.

Soon Parthavi is pregnant and they have a baby boy whom they named as Aditya ‘Adi” Bhagla. On the day of prayer for their new house, Parthavi’s brother and the gang arrive with many gifts for her family. On seeing them, Parthavi thinks that all the issues have been cleared and everything has been sorted between them,. Madhu, however is not convinced. He therefore, stops Parthavi from going to meet them. But being so excited with the thought of reuniting with her family, she runs to them. She leaves both her son and husband at home and goes to buy some sweets. On her way back home, she sees her son and husband being thrown from the balcony abruptly and her brother overlooking them. Parthavi cries in shock, as both the husband and son are bleeding profusely to death.

In nutshell, the climax creates palpable tension, and a hard-hitting ending, leaving the audience with enough to think about. Dhadak brings to highlight some shocking truths about the Indian society and thus makes it a worth the watch. In addition to that, from the moment they set eyes on each other, both Madhukar and Parthavi felt something familiar,pure, and their love blossomed. But as it bloomed, so did their problems. They were in a situation where they were both torn between society and their families and also their fate became uncertain.