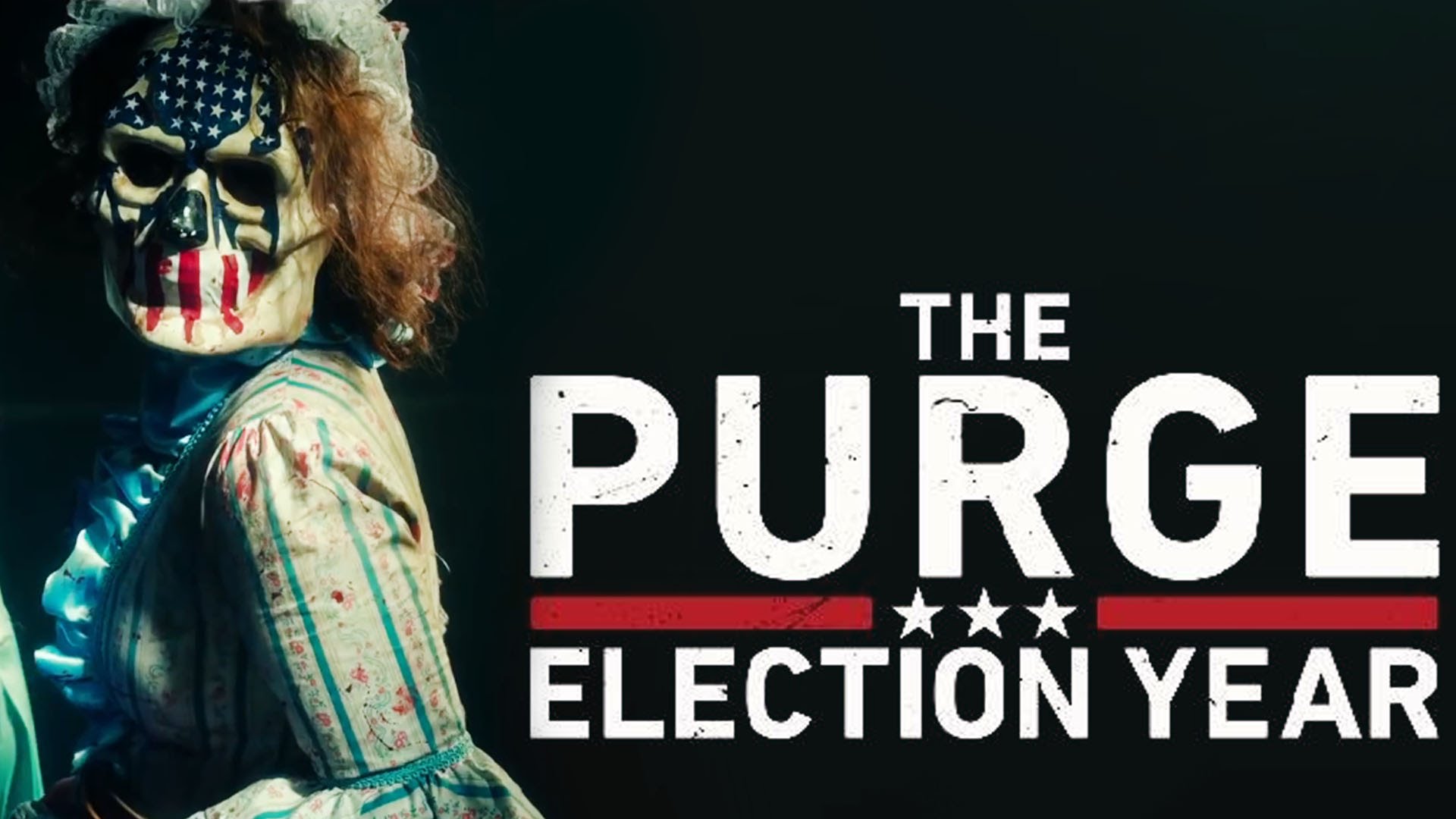 The third ‘Purge’ film is the most excitingly sustained, because the clockwork violence is now merged with dark political satire.

“The Purge: Election Year” is a scurrilously effective pop rabble-rouser — a movie that’s been built to get you riled, and does. It’s a squalid B-movie political horror film that plays to our most reptile-brained basic instincts, and also to our cartoon-noble ideals, and by the end you can’t separate the two; that’s the way canny shameless pop works. In the opening scene, the members of a family are sitting on a couch, bound and gagged and blood-spattered, while a masked killer entertains them with tunes from his “Purge playlist” (he makes an obscenely jaunty segue from “20th Century Boy” by T. Rex to George Clinton’s “We Want the Funk”). A guy like this, in another film, would have been a violent head case, but in the “Purge” movies, where even the most horrifyingly twisted murder is legal for one night a year, he’s just a dude getting his demented ya-ya’s out. He’s the sicko killer inside us all. A bit later, the movie takes us to another Purge Night eighteen years after the first one, when a crew of innocents are holed up in a bodega. The natural born killers they’re facing are tarty teenage girls brandishing jewel-studded automatic weapons (and power saws!) who look as if they’d just stepped out of the slasher movie of Quentin Tarantino’s dreams. Watching “The Purge: Election Year,” it’s easy to see why the rah-rah blahness of “Independence Day: Resurgence” didn’t connect with audiences. In 2016, this is what tasty patriotic popcorn looks like.

“The Purge,” in 2013, was a glorified stalker-in-the-house movie. A year later, “The Purge: Anarchy” improved on it by keeping most of the action to the streets, and by introducing the lean-and-mean actor Frank Grillo as Leo, a haunted good guy who can be as ruthless as a purger. You’d think the concept would now be wearing thin, but “Election Year,” which feels like the final chapter in a trilogy (though after the box office grosses are in, that could change), is the best “Purge” film yet. The action is excitingly sustained in a way that it wasn’t in the previous two, and the political dimension, while crude as hell, exerts a brute-force entertainment value.

The movie revolves around an idealistic savior of a presidential candidate, Charlie Roan (Elizabeth Mitchell), who has pledged to bring an end to Purge Night. (She was the girl who survived that opening scene.) A majority of citizens appear to be leaning her way, so the U.S. government, born again as the NFFA (the New Founding Fathers of America), decides that there’s only one way to stop her: by abducting and killing her on Purge Night. James DeMonaco, who has written and directed all three films, still walks a slightly awkward line between exploitation and intelligence, and he should really stop shooting every scene in wavery hand-held close-up, but in “Election Year,” he embraces the pulp guts of his material.

The “Purge” films may be the rare example of high-concept movies in which the concept is actually more provocative than the execution. Not that the concept is all that original; it’s been banged together from bits and pieces of the movie past. A future in which gangs of youthful hooligans run wild is, of course, straight out of “A Clockwork Orange.” The notion of ritualized slaughter as a legal and celebrated spectacle, all presided over by a theocracy of decadent elites, is right out of “The Hunger Games.” The stray glimpses of baroque terror we see on Purge Night — in “Election Year,” they include death by guillotine and victims strapped onto car hoods like deer — evoke the random marauder madness of “The Road Warrior.” And the plot of each film, with a crew of survivors doing all they can to get out of the way of people who’ve become killing machines, makes the “Purge” movies a lot like zombie films. If you squint a bit, you can make out the ghost of “Lord of the Flies,” that 1954 schoolroom classic that introduced so many us to the concept of The Beast Within.

What’s unique in the “Purge” films is how much the anarchy and murderous evil are sanctioned. They’re what an overly controlled society should hate, yet in the “Purge” films homicidal craziness has become a cornerstone of civic duty. How messed up — and relevant — is that? Keeping the masses down by encouraging them to vent everything that they are. It’s like a violent version of Internet culture. To all that, the “Purge” films add a drop-dead layer of political satire, and in “Election Year” that layer is pushed front and center. The NFFA sells Purge Night as an escape valve that gives rise to an otherwise peaceful, tranquilized society. Really, though, it’s a conspiracy and a fraud: a way of killing off poor people so that the rich won’t have to support them. Not, perhaps, since “Soylent Green” has a future-shock parable been so memorably obvious in its metaphor. Kyle Secor, as the NFFA ringleader who presides over the annual Purge Mass (a church service in which the members of the power elite pray to the gods of murder to keep them rich), seethes and exhorts like a Richard Nixon mask come to life. The skewed intensity of his performance — so many people to keep down! so much money to protect! — cues you to see that, yes, this really is a movie about what’s happening today. 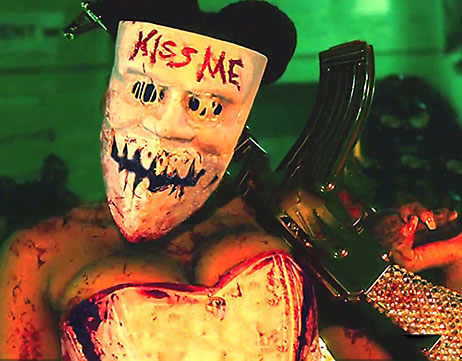 Elizabeth Mitchell isn’t a bad actress, and she bears a fetching resemblance to Judy Collins, but she’s miscast. Even in the pop future, she doesn’t seem remotely presidential, which may be why she’s asked to wear a pair of horn-rims that make her look like a porn star impersonating a college professor. But she forms a convincing bond with Grillo’s Leo, who is now her police bodyguard, and their deadpan flirtation helps to carry the movie. Mykelti Williamson, as the deli owner who has just lost his purge insurance and is full of wrath about it, is the film’s perpetual scene-stealer, and the anchor of its comic-book racial politics. When our heroes are huddled in a triage van, he brings down the house with a retro-badass line like, “There’s a whole bunch of Negroes comin’ right this way, and we’re sittin’ here like a bucket of mother—-in’ chicken!” In “The Purge: Election Year,” it’s kill or be eaten.

The violence in “The Purge: Election Year” usually promises to be worse than it is, which is one reason why this is a mainstream movie. “A Clockwork Orange” shocked people because of how it got us to identify with Alex, but there’s never a moment in “Election Year” when a character we know and like turns into a purger, killing for the nasty pleasurable kick of it. The movie never takes that risk, and so it never reaps the reward of dramatic complexity. The one thing in “Election Year” that carries a tinge of honest shock value is the portrayal of a political ruling class that elevates its self-interest into a religion of destruction that pretends to benefit everyone else. You may watch these scenes with a shock of recognition, and with a feeling that it’s time that side of American political life was purged.