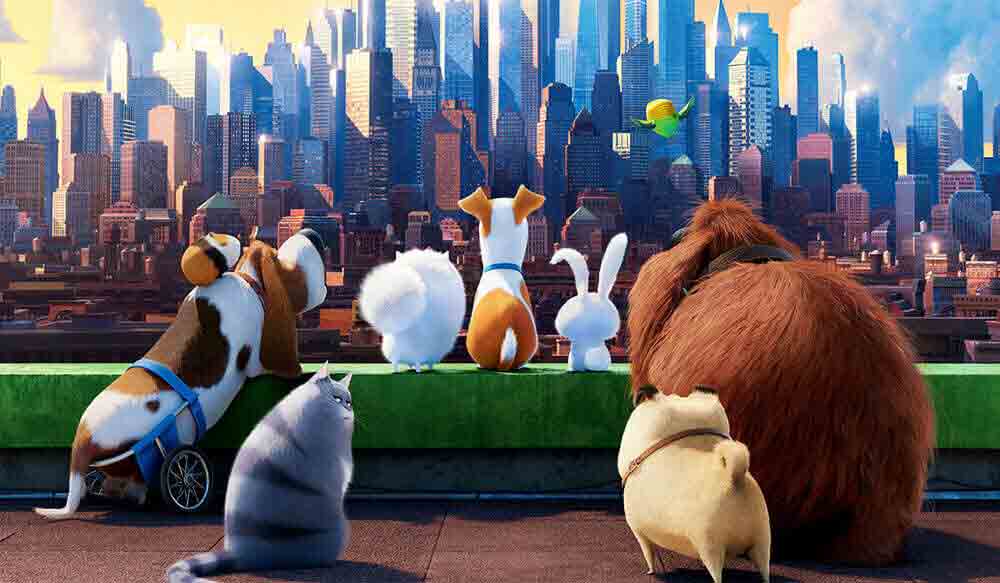 A terrier named Max (Louis C.K.) lives a comfortable life with his owner Katie (Kemper). His neighbourhood friends Chloe (Bell), Mel (Moynihan), Buddy (Buress) and Sweet Pea also are similarly spoiled by their owners. Things change one day, when Katie adopts the large and shaggy Duke (Stonestreet), much to Max’s dismay. Eager to take over the home, Duke leaves Max stranded in the city, Max is pursued by gangster cat Ozone (Steve Coogan) before being rescued by the bunny Snowball (Hart). Meanwhile, Gidget (Slate) leads a rescue party out to find Max. It’s all about what the pets are up to while their masters are away.

Created from the same animation film production company (Illumination Entertainment) that gave us Despicable Me, Pets is makes us privy to the adorable, mischievous and sprightly (in that order) activities of a bunch of animals whose owners are obviously and blissfully clueless about their shenanigans. Co-directors Chris and Yarrow introduce us to a slew of characters, well rendered and ranking high on the cuteness scale without coming across as saccharine sweet. In fact, it can easily be said that the best part about this fast-paced film is the quality of the animation.

Although the voice-over cast isn’t as liberally sprinkled with A-listers as some of the other big animated films, they do an admirably good job. Never once do their own personalities overshadow the characters they’re lending their voices too.

While the plot may be simplicity in itself, it’s the humour in the film that drives it along the brisk hour-and-a-half. Apart from the suitably frantic Max and Duke, Gidget who has a huge crush on Max and Chloe the typically aloof kitty cat come across as the most endearing. And in a zone by himself, there’s Snowball the radicalized, borderline psychotic and hyper-aggressive rabbit – a clever choice of animal, considering that bunnies are usually associated with all things cute and cuddly.

It wouldn’t take much of a stretch of imagination to think that the filmmakers themselves love animals. All in all, Pets comes across as a breath of fresh air in the world of animated films.