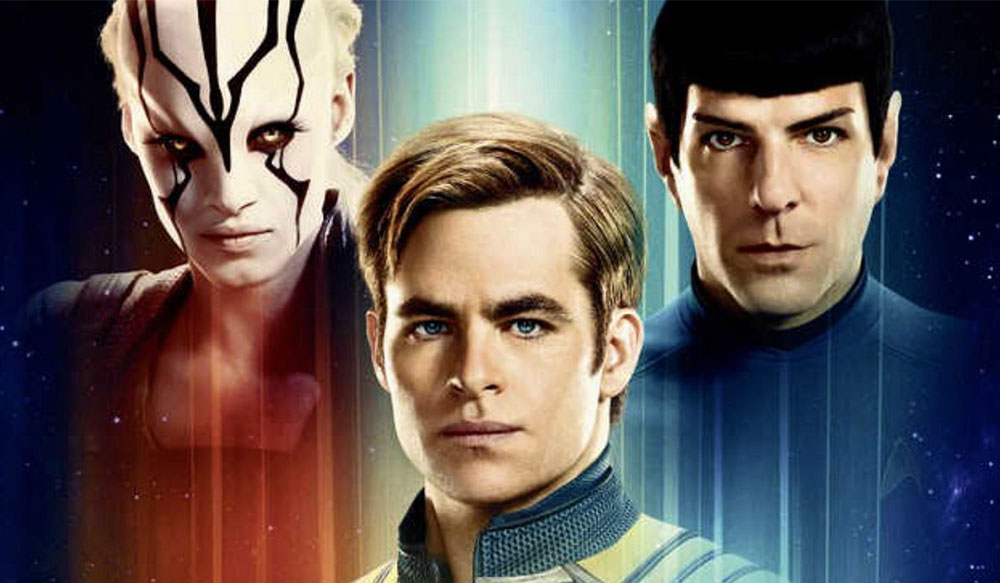 STAR Trek celebrates its 50th anniversary this year, and there’s no better way to usher in this milestone then by welcoming the arrival of a new “Star Trek” movie. Better still, not only is “Star Trek Beyond” a solid entry in the enduring Gene Roddenberry-created series but it also emerges as one of this summer’s most entertaining movies. Credit Justin Lin (who takes over directing duties for J.J. Abrams) and screenwriters Simon Pegg and Doug Jung for injecting a vibe here that could be best described as “vintage Trek.”

The movie is full action stations ahead as our favourite crew are sent beyond the reach of the Federation and put on the defensive. Just more than halfway through the five-year mission they started in Star Trek Into Darkness, the Enterprise crew stop off at a very Elysium-meets-Interstellar-meets-Naboo  starbase called Yorktown (the starbase design is deceptively intricate, like many of the gorgeous sets in this film).

Chris Pine is more subdued than the sparky rebel of before as he matures into his role of the responsible Captain Kirk who is starting to question just what it is they are doing out in space and toying with the idea of a career change. Holiday time is cut short, though, when the Enterprise is asked to deal with a distress call and off they set to a faraway planet. Here they encounter a literal swarm of some unknown aliens who seem hell-bent on destruction. In time-honoured fashion, the Enterprise is destroyed, the crew are scattered and forced to consider their mortality, purpose and just how they are going get out of this problem.

There are plenty of fast-paced gymnastics from the crew, but the film, ironically enough, works best in the quiet, more contemplative moments. Kirk is grappling with the fact that he is about to turn older than his father ever got to be and the idea that he is now unable to measure himself against George Kirk, is unsettling.

Kirk is eventually pitted against Krall (Elba is mostly unrecognisable under the make-up), who forces him to consider where he fits into Federation structure. Spock (Quinto) discovering the passing of his alternative self creates a poignant and elegant memorial scene to Leonard Nimoy, while it is bittersweet watching the late Anton Yelchin figure out the plot as clever, ever-enthusiastic Chekov. Bones (Urban) is the voice of reason to everyone else’s fantastical ideas, while Scotty (Pegg) provides the laughs and Uhuru (Saldana) keeps everyone sane and grounded. 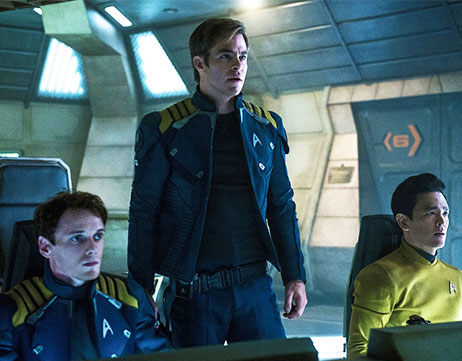 Every member of the command structure gets a chance to show off their action skills, though it does get into Fast and Furious territory toward the end and you start wondering when Kirk is going to get off that bike already. On the planet they meet Jayla (Boutella), a young castaway working hard to get away from the big, bad swarm and in the solitary youngster the crew find a convenient foil to explain their methodology and thinking.

Except for when it is riffing off the musical theme used in the first Star Trek reboot movie, the score is rather ho-hum, not helping along the atmosphere at all. The plot, we eventually discover, hinges on a tiny Macguffin of sorts and if you really question it too much, there are holes to be discovered. Still, the script is funny, the film is tauter, but less uptight, than Into Darkness and it charms you along in old-school Star Trek fashion with its emphasis on teamwork. It all comes together nicely as this crew start exploring new territory – they are starting to leave behind the baggage of the original crew and creating their own personalities and stories and it looks like that is a fun process.