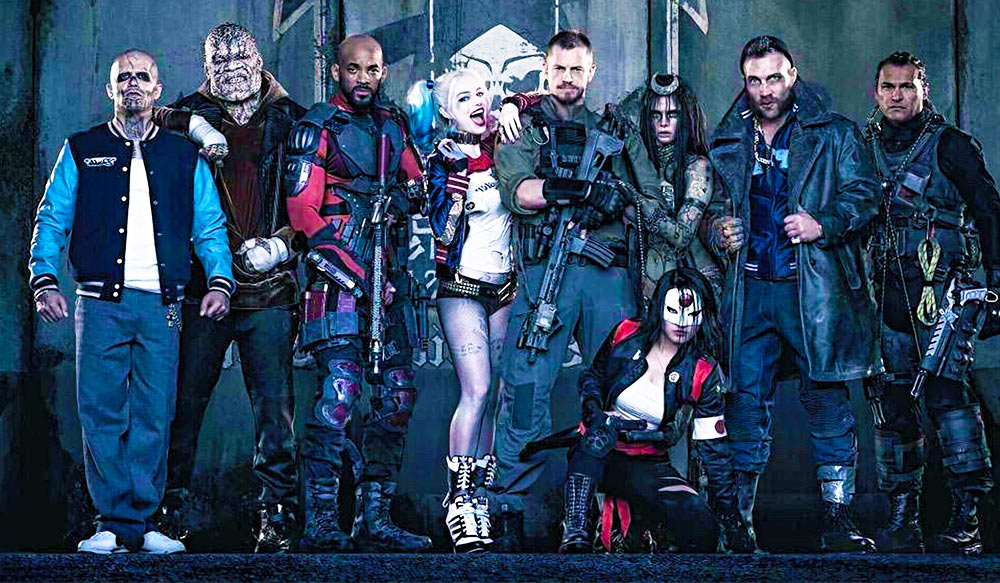 The Joker and Harley Quinn steal the show in this DC Comics-style riff on ‘The Dirty Dozen,’ which shares the same bleak view of superheroes as ‘Batman v Superman.’

Blame it on Batman, but the DC universe has gotten awfully dark in recent years, especially compared with the candy-coloured competition over at Marvel. Rather than bringing levity and irreverence to the increasingly unpleasant comic-book sphere, as its psychedelic acid-twisted marketing campaign suggests, “Suicide Squad” plunges audiences right back into the coal-black world of “Batman v Superman: Dawn of Justice,” picking up after the Man of Steel’s demise to imagine a government so desperate that its only hope to fight the next “meta-human” threat is by assembling a team of the gnarliest super-villains around.

While that idea doesn’t make a lick of sense — especially since the U.S. wouldn’t be facing a meta-human threat if overzealous federal agent Amanda Waller (Viola Davis) hadn’t unlocked these bad guys to form Task Force X in the first place — implausibility alone doesn’t make it any less enticing to imagine how a director of David Ayer’s caliber might pluck nine of the most ill-behaved characters from the DC stable for an intense spandex-clad, super-powered spin on “The Dirty Dozen.” But for reasons beyond Ayer’s control, he’s beholden to the corporate vision of other recent DC adaptations, most notably Zack Snyder’s sleek-surfaced and oppressively self-serious riffs on the Superman legend. While it would have been amazing to see the director (fresh off WWII-set suicide-mission movie “Fury”) push his own nothing-to-lose anarchic boundaries, he’s ultimately forced to conform to Snyder’s style, to the extent that “Suicide Squad” ends up feeling more like the exec producer’s gonzo effects-saturated “Sucker Punch.”

Suicide Squad stands to become one of the biggest hits, with a grafted-on appearance by Jared Leto as the Joker likely to double the project’s already formidable box office potential — a shrewd addition, since no one but comic-book fans will know the other characters going in. Faced with having to introduce all these new players, Ayer opens the film by attempting to compress origin stories, unique abilities and “how they were captured” vignettes for nine different characters into the film’s overloaded first act, blasting hip hop to signify how “gangsta” they are. (As models for this sort of thing, Akira Kurosawa’s “Seven Samurai” remains the gold standard, etching each of its heroic combatants as distinct individuals, though Hollywood examples “Ocean’s Eleven” and “X-Men” serve as more relevant models here.)

At the top of the list are lethal gun-for-hire Deadshot (Will Smith) and Harley Quinn (Margot Robbie), a beautiful Arkham Asylum psychiatrist with a tacky Bronx accent whom the Joker apparently subjected to both electroshock treatment and a disfiguring acid bath, revealing how both were arrested by Batman (still played by Ben Affleck). Most of the other characters run together, their mini-bios wedged in between bites of an undercooked steak dinner as Waller briefs a high-ranking war-room muckety-muck (David Harbour) on her crazy plan to tame these lunatics.

There’s Ozzie-accented Captain Boomerang (Jai Courtney), who is basically a thief with a boomerang; a heavily tattooed, cartel-scary pyromaniac named El Diablo (Jay Hernandez); Slipknot (Adam Beach), who can “climb anything”; a reptile-skinned mutant creature called Killer Croc (Adewale Akinnuoye-Agbaje); and scientist June Moon (Chanel model Cara Delevingne), who has been possessed by an almost-7,000-year-old witch. There’s also a random ninja named Katana (Karen Fukuhara), who wields a magic samurai sword that stores the souls of all it has killed. Diversity questions aside, of this latter group of characters, only Diablo is remotely interesting, thanks to an admirable attempt by Ayer to give him a conscience(the human flamethrower is torn up about having toasted his wife and kids, and unlike the others, he actually denounced his ability and turned himself in).

Critics often complain that overcrowded comic-book movies don’t devote enough energy to psychology or performance, focusing instead on action and big CG set-pieces. In keeping with its theme of potential redemption, “Suicide Squad” errs on the opposite extreme, inventing elaborate motives for characters who are much more interesting when they’re bad. Perhaps it helps Smith to believe that contract killer Deadshot has a soft spot for his daughter, but it feels like that dimension of his character is weighing down the business at hand, giving Smith the chance to “act,” when he has really been hired to inject his trademark brand of “Bad Boys” insouciance to the proceedings.

The most cumbersome of these emotional sidecars involves a romance between June Moon and Col. Rick Flag (Joel Kinnaman) that, through a series of twists too contorted for the film to make clear, gives Waller temporary control of the witch’s heart, before backfiring and unleashing Moon’s all-powerful alter ego, the Enchantress, upon Midway City — a generic-looking urban battleground far enough from both Metropolis and Gotham that the characters can destroy it and everyone who lives there without disrupting the continuity of the other DC franchises in the pipeline.

When the Enchantress gets loose, she picks a subway commuter at random and transforms him into her brother, the Adversary, vowing to destroy mankind and opening one of those giant purple vortexes where the clouds part and a massive electricity field funnels ominously into the center of a heavily populated area (as seen in “The Avengers,” “Ghostbusters” and countless other brink-of-doom scenarios). Except that Midway City appears to be deserted, except for an army of bubbling-tar-headed foot soldiers ready to do the Enchantress’ bidding — which gives the members of Task Force X something to occupy them until Ayer is ready for the final confrontation with the Enchantress, who is, let’s face it, the lamest DC villain since Sharon Stone stalked “Catwoman.”

Whereas Ayer blurred the lines between the good guys and the bad guys in such hard-R thrillers as “Training Day” and “Harsh Times,” and brought immersive street cred to the relatively tired cop genre with “End of Watch,” he’s saddled with a family-friendly PG-13 rating (his first) and entirely too many characters to let his gritty sensibility loose here. Yes, he and Leto manage to invent a version of the Joker every bit as unsettling as the late Heath Ledger’s immortal incarnation, turning the iconic Batman rival into a ruthless seducer (hunt down “Mr. Nobody” to see the origins of Leto’s wicked deep-throated cackle), but the character barely has anything to do. The Joker exists only to inspire his deranged arm candy, Harley Quinn. As evidenced by her gratuitous bathtub cameo in last year’s “The Big Short,” Robbie seems to represent what red-blooded, Maxim-reading audiences want from women on-screen in the year 2016: A doctor stripped of her intelligence and her conservative tweed professional attire, squeezed into hooker hot-pants and a too-tight baby T, who walks like a pole dancer and fights like some sort of homicidal cheerleader. Ayer allows Harley Quinn a certain deranged sense of humour, giving her the chance to deliver the sarcastic zinger to multiple scenes, but he only half-recognizes what a tragic character she is, and it’s discouraging to think that the film’s biggest laugh comes at the expense of Batman punching her in the face.