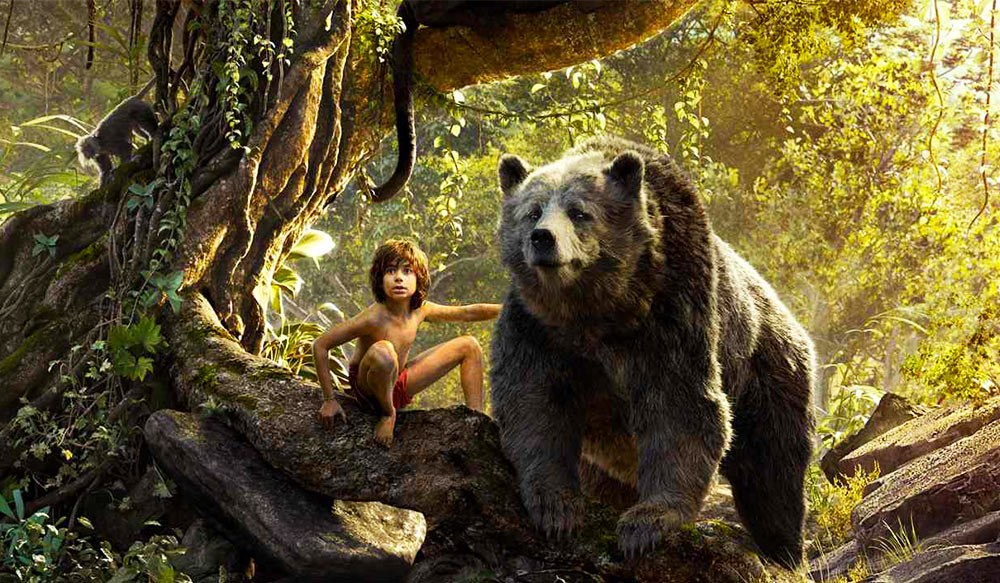 I saw the newest Disney version of “The Jungle Book” in the company of my enthralled 12-year-old son, and there were moments when I envied him—but not too many, because the film is so surefooted in its effects, so precise and simple in its characterizations, and so clear about what it’s trying to say about the relationship between humanity and nature, that it made me feel about his age again, too. Maybe younger.

From the opening sequence of young Mowgli (Neel Sethi) racing through the jungle in the company of his adoptive wolf family and his feline guardian, the black panther Bagheera (Ben Kingsley), through its comic setpieces with the layabout Baloo the Bear (Bill Murray) and its sinister interludes with the anaconda Kaa (Scarlett Johansson), the despot orangutan King Louie (Christopher Walken) and the scarred Bengal tiger Shere Khan (Idris Elba), the movie bears you along on a subdued current of enchantment, climaxing in a thunderous extended action sequence that dazzles while neatly tying off every lingering plot point and gathering up all the bits of folklore, iconography and Jungian dream symbols that have been strewn throughout the story like Hansel and Gretel’s breadcrumbs. 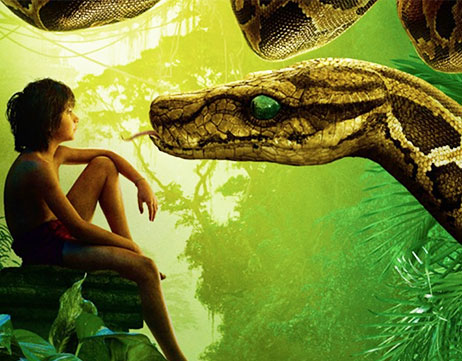 It’s not accurate to call this “Jungle Book” a “live-action” version, since so much of it has been generated on a computer. But screenwriter Justin Marks, director Jon Favreau and their hundreds of collaborators render such distinctions moot. Combining spectacular widescreen images of rain forests, watering holes and crumbling temples, a couple of human actors, and realistic mammals, birds and reptiles that nevertheless talk, joke and even sing in celebrity voices, the movie creates its own dream-space that seems at once illustrated and tactile. It’s the sort of movie you might inadvertently dream about after re-reading one of Rudyard Kipling’s source books or re-watching the 1967 animated Disney film, both of which contributed strands of this one’s creative DNA.

The Disney animated version was the last cartoon feature personally overseen by Walt Disney, and its release one year after his death marked the start of a period of creative wandering for the company (though other features that had been in development for years, most of them lackluster, would appear throughout the decade that followed). Like a lot of the company’s 1960s and ’70s output, it was relaxed to a fault—a succession of beautifully rendered, mostly jokey set-pieces strung together by memorable songs, including “The Bare Necessities,” “I Wanna Be Like You” and the anaconda’s seduction song “Trust in Me”—but it still made a deep impression on ’60s and ’70s kids like the 49-year-old Favreau. This incarnation is a more straightforward telling that includes just two brief, according-to-Hoyle musical numbers, “The Bare Necessities” and “I Wanna Be Like You”—performed by Sethi with Murray and Walken, respectively. It relegates a longer version of the ape’s song and a torch-song-y version of “Trust in Me,” performed by Johansson, to the approximately seven-minute end credits sequence, which is so intricately imagined as to be worth the ticket price by itself. Other numbers, including the elephants’ marching song and “That’s What Friends Are For,” performed by a barbershop quartet of mop-topped vultures, are MIA, presumably in the interest of pacing.

I mention all this not because I consider the film’s lack of music a shortcoming (it’s never a good idea to mistake the lack of something you personally wanted or expected for a “flaw”) but because it gives some indication of how gracefully this “Jungle Book” juggles the competing interests of parents and kids. Musically, visually and tonally, there are enough nods to the 1967 version to satisfy nostalgia buffs, but not so many that the film becomes a glorified rehash. Kipling’s tales are a stronger influence, down to the scenes where the wolves, Mowgli and other creatures recite a stripped-down version of Kipling’s poem “The Law of The Jungle” (“…For the strength of the Pack is the Wolf/and the strength of the Wolf is the Pack”). And there are nods to Edgar Rice Burroughs’ Tarzan stories and the masterful comics illustrator Burne Hogarth’s adaptations, which seem to have influenced the way the movie’s CGI artists render the movie’s trees: as gnarled, knuckled, pretzel-twisted, vine-shrouded wonders, rising from the forest floor and reaching toward the sky. 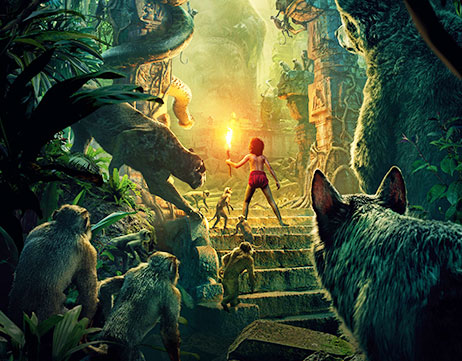 The film creates its own, more politically evolved version of Kipling’s literary ecosystem, with its ancient animal beliefs and practices, such as predators and prey declaring a “water truce” during a drought so that they can all drink unmolested from a parched watering hole. And it invests Mowgli a touch of optimistic environmentalist fantasy: where humanity’s mastery of fire and tools was presented in earlier films as a threat, and Mowgli’s fated exit from the jungle as an unfortunate necessity, in this film the boy is shown using his ingrained ingenuity to solve problems beyond the capabilities of his animal pals, as when he builds an elaborate rappel and pulley system to help Baloo claim honey from a cliff-side beehive that he’s been coveting for years. The idea here seems to be that humanity is not necessarily fated to subjugate and destroy nature—that people and animals can live in harmony if we behave with kindness and mercy while showing reverence for the ancients of other species, like the elephants that Bagheera credits with creating the rain forest and directing the flow of water by digging canals with their hooves and tusks.

The movie takes these ideas and others seriously, but in a matter of fact way, so that they don’t feel clumsily superimposed, but rather discovered within a text that has existed for more than a century. Kingsley’s unhurried storybook narration hypnotizes the audience into buying everything Favreau shows us, as surely as Johansson’s Kaa voice-work hypnotizes Mowgli. (The latter sequence includes one of the new movie’s most extraordinary embellishments: as Mowgli stares into one of Kaa’s eyes, he sees his own origin story play out within it.)

Another kind of balancing act is happening in the voice actors’ performances. Favreau leans on distinctive-sounding stars to earn knowing chuckles from the audience, and lets some of their familiar physical and facial tics seep into the animal “performances”: Murray is a shambling pleasure-seeker in life as well as in many of his movie roles. Walken is legendarily good at playing funny-scary villains who love to mess with heroes’ minds (he’s merged here with Marlon Brando’s performance as Kurtz in “Apocalypse Now,” entering the story swathed in Rembrandt gloom). Kingsley has aged into one of the cinema’s great mentor figures. And so on.

But the film is never content to use our affection for its voice actors as a storytelling crutch. These are strong, simple, clearly motivated characters, not movie star cameos wrapped in CGI fur. The most impressive is Elba’s Khan. His loping menace is envisioned so powerfully that he’d be scary no matter what, but the character becomes a great villain through imaginative empathy. As was the case with Magua in Michael Mann’s “The Last of the Mohicans” and General Zod in “Man of Steel,” we understand and appreciate his point-of-view even though carrying it out would mean the death of Mowgli.

In every way, this quietly majestic film should be considered a triumph. The familiar, picaresque story of a young boy raised by forest creatures but fated to re-join Man has been re-imagined as a funny, scary, affecting family adventure with mythic heft but a refreshing lack of swagger. It was made with the latest in movie-making technology but has the ethical values and wide-net storytelling sensibility of an Old Hollywood classic. At its best it feels as though it always existed and we are only now discovering it.