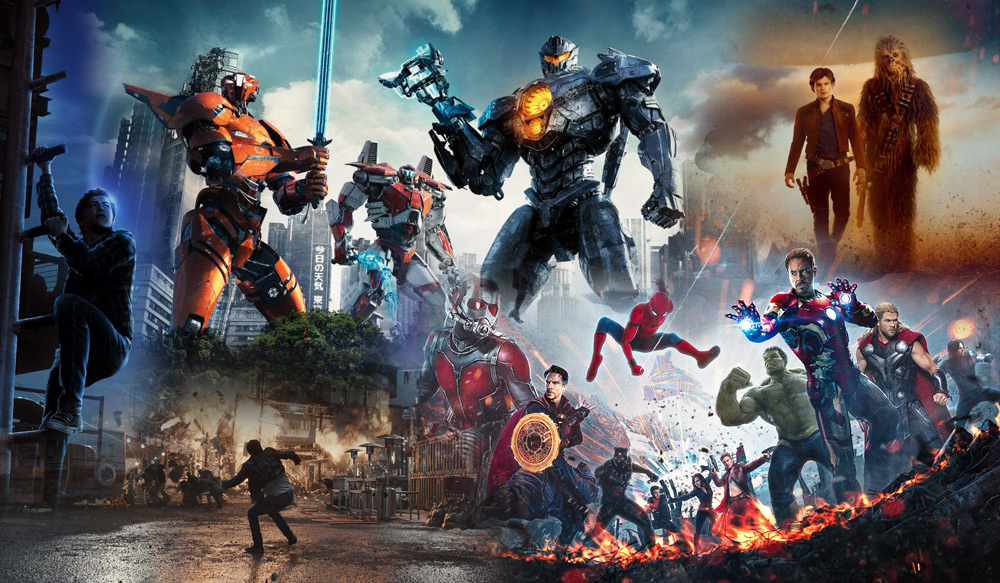 Directed by Steven S. DeKnight (Marvel’s Daredevil series), Pacific Rim Uprising is set 10 years after the events of the first movie and follows a new generation of pilots tasked with battling massive “Kaiju” beasts from the sea using gigantic robots known as “Jaegers.”

As they seek justice for the fallen, their only hope is to unite together in a global uprising against the forces of extinction. Jake, the son of late Stacker Pentecost (played by Idris Elba in the first movie), is joined by gifted rival pilot Lambert (The Fate of the Furious’ Scott Eastwood) and 15-year-old Jaeger hacker Amara (newcomer Cailee Spaeny), as the heroes become the only family he has left. Rising up to become the most powerful defense force to ever walk the earth, they will set course for a spectacular all-new adventure on a towering scale.

Adapted from Ernest Cline‘s nostalgia-packed novel, the sci-fi movie centers on an ordinary kid who taps into extraordinary wealth and fame while playing a virtual reality game.

In the year 2045, people can escape their harsh reality in the Oasis, an immersive virtual world where you can go anywhere, do anything, be anyone—the only limits are your own imagination. OASIS creator James Halliday left his immense fortune and control of the Oasis to the winner of a contest designed to find a worthy heir.

When unlikely hero Wade Watts conquers the first challenge of the reality-bending treasure hunt, he and his friends—known as the High Five—are hurled into a fantastical universe of discovery and danger to save the OASIS and their world.

Iron Man, Thor, the Hulk and the rest of the Avengers unite to battle their most powerful enemy yet — the evil Thanos. On a mission to collect all six Infinity Stones, Thanos plans to use the artefacts to inflict his twisted will on reality. The fate of the planet and existence itself has never been more uncertain as everything the Avengers have fought for has led up to this moment.

Solo: A Star Wars Story, or simply Solo, is an upcoming American space Western film centered on Han Solo, a character from the Star Wars franchise. Through a series of daring escapades deep within a dark and dangerous criminal underworld, Han Solo meets his mighty future copilot Chewbacca and encounters the notorious gambler Lando Calrissian, in a journey that will set the course of one of the Star Wars saga’s most unlikely heroes.

Solo is accompanied on the timeline by the Del Rey tie-in novel Star Wars: Last Shot, the synopsis of which would appear to clarify just who’s in charge of the iconic Millennium Falcon at the start of the movie; taking place before Solo, the synopsis describes “the crew of the Falcon” as “Lando Calrissian and the droid L3-37 at the dawn of an ambitious career.”