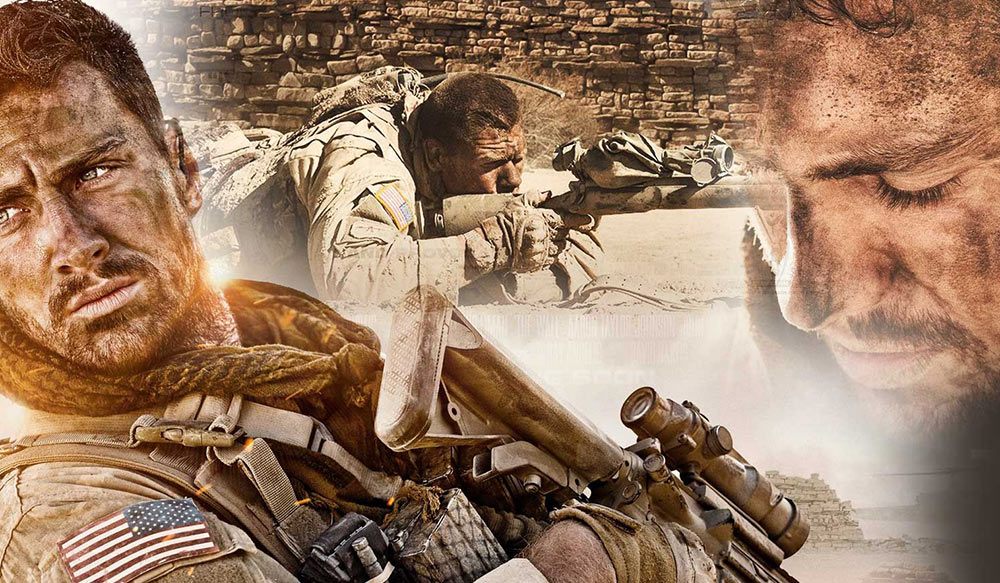 Set in Iraq in 2007 — when the war is supposed to be over — The Wall stars Aaron Taylor-Johnson as Allen Isaac and John Cena as Shane Matthews, soldiers called in to find out what’s happened at a pipeline construction site. What’s happened is that several contractors are dead, each apparently shot through the head. There’s a skilled shooter out there somewhere, and as soon as the soldiers investigate further, things go south.

Both are badly wounded.

Matthews is shot and lies out in the open; Isaac throws himself behind a broken down old brick wall. A complex game of cat and mouse has begun.
The sniper keeping these men pinned to the desert floor is never seen. Still, enough has been said in advance about who he might be — the legendary Juba, perhaps? — and about his skill as a marksman that to the men he approaches mythical status.

Seemingly omnipotent but invisible (sort of like God, you might say) the sniper toys with Isaac physically and psychologically, engaging in a battle of wits that turns up crucial information on both sides.

Isaac uses all his skills to fight for survival.

Halfway through the story, you won’t be rooting for anybody. The story is gripping and hugely anxiety provoking, but it’s not so much a battle between good guys and bad guys as it is an illustration of the absolute futility of what they’re doing.

The Wall involves some clever writing. It would seem to be an anti-war movie, but there’s no question that the story is open to interpretation. Taylor-Johnson is on his own for much of the action, and he is entirely convincing as a man determined not to die.

The film’s close focus on one or two individuals makes the situation that much scarier, the fear that much more intense. And it makes the overall

impact of The Wall that much more profound.